The hugely-popular Italian kicked off his day with Al'Ali in the Norfolk Stakes for Simon Crisford, before winning the Hampton Court aboard the Michael Stoute-trained Sangarius and the Ribblesdale Stakes with John Gosden's Star Catcher.

It was then all eyes on the Gold Cup, where Dettori again emerged victorious through Gosden's defending champion Stradivarius.

With two races left to be run, bookmakers were quaking with memories of Dettori's 'Magnificent Seven', when he went through the card to win all seven races at Ascot in September 1996, very much to the fore. 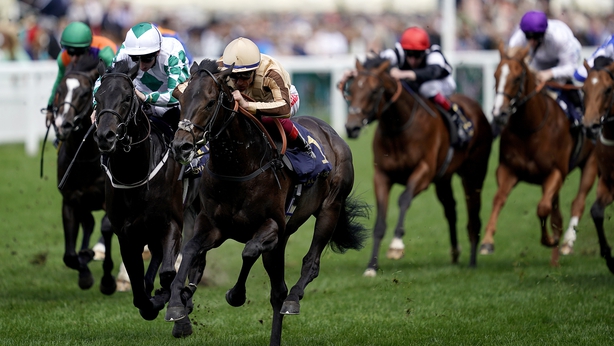 Gosden said: "This 47-year-old kid (Dettori) take this to another level, like a Wimbledon semi-final and final. He's riding quite beautifully. He occasionally listens to me, but not too much."

In winning his seventh successive race, Stradivarius created his own little piece of history - although those who took the even money had a little anxious moment early in the straight.

For once Dettori appeared to be in the wrong place as he was stuck behind horses, with Dee Ex Bee still in front alongside Master Of Reality, but as soon as a gap appeared the chestnut was through it like a shot.

With two furlongs to run in the Britannia Handicap, Dettori was two lengths clear on Turgenev and the crowd was collectively holding its breath as history beckoned.

However, Ralph Beckett's Biometric came with a sustained run from the rear under Harry Bentley to spoil the party.

The winner was having just his fourth run and was winning for the third time - providing the bookmakers with huge respite given Turgenev was available at 20-1 in some places this morning and returned 7-2.

Dettori said: "20 years ago I would have won that!

"He was 16-1 this morning, went off favourite and he gave me a great spin. I've had a good day so I'm not going to cry."