Arizona came home strongly to give Aidan O'Brien a ninth success in the Coventry Stakes at Royal Ascot.

Sent off the 15-8 favourite on the back of an impressive eight-length win at the Curragh, his supporters will have been a little worried early on.

Outpaced, Ryan Moore was riding him pretty vigorously from halfway, but the fine stamp of a two-year-old began to eat up the ground inside the final furlong.

Mark Johnston's Makyon had led the field along under Silvestre de Sousa and entering the final furlong was still in front.

As his stride shortened the Archie Watson-trained Guildsman threw down a challenge before Richard Hannon's Threat, the second-favourite, clicked into gear.

He had no answer to the son of No Nay Never, however, who beat Threat by half a length, with Guildsman a neck back in third.

The York-based trainer's grey, who disappointed badly last time out in the Lockinge Stakes, was winning at the highest level for the first time in his career. 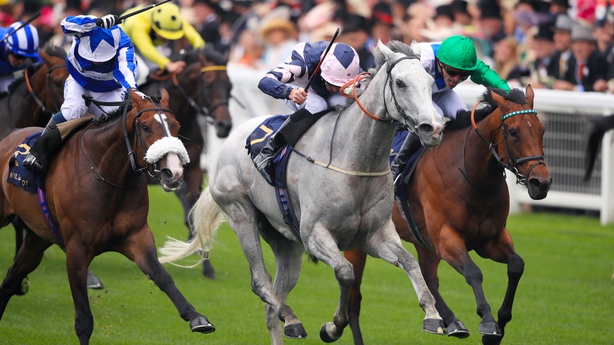 His fortunes could not have contrasted more with last year's winner Accidental Agent, who refused to come out of the stalls.

The popular Laurens made a bold bid for home and hit the front two furlongs out, but she could never put much daylight between her pursuers.

William Haggas' One Master came swooping through, showing the pace that won her the Prix de la Foret last season, and certainly hit the front, before her run she faltered inside the final 100 yards.

That left Beat The Bank, another who ran poorly in the Lockinge, and Lord Glitters (14-1) to fight it out, with Danny Tudhope managing to get his grey head in front by a neck.

Blue Point confirmed his superiority over Battaash to win back-to-back renewals of the King's Stand Stakes.

Billed as a match between the big two, it developed into everything race fans wanted inside the final furlong - but Charlie Appleby's five-year-old was pulling away at the line.

In the early stages Jim Crowley on Battaash was tracking Houtzen, but they were on their own and just after halfway Crowley took the decision to track over towards the main group.

As Blue Point moved to the head of that pack Battaash travelled up strongly alongside him, only for James Doyle's mount to see it out the strongest.

Ian Williams enjoyed his first success at Royal Ascot when The Grand Visir defied top-weight in the Ascot Stakes and for good measure addled the third, Time To Study.

The Alvechurch trainer is one of the best dual-purpose handlers in the business and still has a jumps career in mind for The Grand Visir, who came up trumps in this two-and-a-half-mile handicap on his fourth start under both codes since his move from John Butler's stable.

The steadier of 9st 10lb proved no burden as The Grand Visir (12-1) had enough in hand to hold the staying-on Buildmeupbuttercup by one and a quarter lengths under Richard Kingscote.

Time To Study was three and a half lengths away in third, with Fun Mac fourth.