Short sleeves and ice cream were the order of the first day at Fairyhouse, my forecast of 20 degrees proving conservative. The mercury touched the mid-20s at one stage.

The weather appears set fair for tomorrow too. A bumper crowd is expected to lap up the atmosphere on Irish Grand National day.

Jon Ess landed a punt on the flat in Cork earlier this month. He returns to hurdling off an attractive mark. His jumping technique looked pretty solid in three maiden hurdles. The Mouse Doctor, and Lever Du Soleil head a host of possible dangers.

Coeur Sublime renews rivalry with three horses who finished behind him in the Triumph Hurdle. He has proven a slow learner over hurdles, but appears to be getting his act together. The suspicion remains that Fairyhouse isn't his track.

He can be taken on at a short price. Way Back Home appeals as a solid e/w play against him. Padraig Roche's charge is improving fast. Progress will need to continue here, but that's quite possible. His jumping is a big asset. Expect him to pop out in front, and hopefully stay there.

Spades Are Trumps was quite a promising novice. He disappointed when sent handicapping, albeit in hot company. He may have had a physical issue, as he went missing for almost a year. His comeback at Naas was full of promise.

While this lightly raced sort has shown his best form on deep ground, it's too early to say it's a requirement. He looks well handicapped, and the step up in trip should help. Mormon, and Golden Jewel were also considered.

The admirable Wicklow Brave, comes here having had his pocket picked at Cheltenham last time. A repeat of that form should be good enough. However this veteran of over 50 races, may struggle to back up. A chance is taken on the improving Not Many left.

This six-year-old produced a career best in the Pertemps at Cheltenham. Tomorrow's trip is short of his optimum, but he may get away with it. Expect a positive ride from Robbie Power.

Selection: Not Many Left 9/1 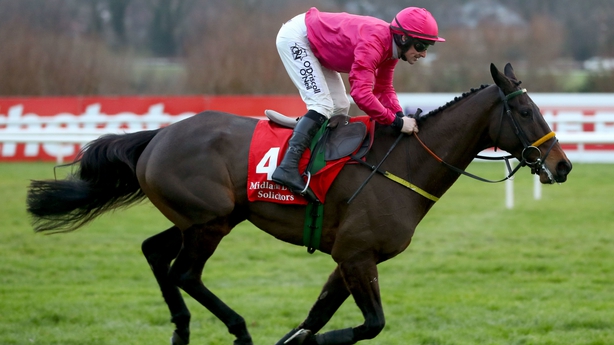 Hard to get away from the horses that head the weights. This is probably an optimum trip for Snow Falcon [above]. He comes here fresh, and is readily preferred. Ordinary World is favoured by race conditions, but his rating probably flatters.

Tout Est Permis is a horse going places. He looked a credible challenger for championship honours at Cheltenham. Connections decided to skip the Festival. Their patience can be rewarded here.

It won't be easy. He has risen 19 pounds in the weights since romping home in the Troytown at Navan. That's strong form though. His subsequent Thurles win, over an inadequate trip, confirmed the progress. Expect this race to be his last handicap for some time.

Hopefully his class will shine through. With the bookies offering extra places, Shady Operator might be worth a saver. This horse probably ran in the wrong race at Cheltenham. He still ran better than his finishing position suggests. With the extreme stamina test expected to suit, he could easily grab a place off a light weight.

Wishmoor has jumping issues. When he puts it together, like at Punchestown on penultimate start, he can be hard to catch. Fencing frailties returned to haunt him at Naas last time. In the hope of a relatively clean round, he rates the selection. Walk To Freedom also appeals as well handicapped. He's another prone to errors though.

Andy Dufresne arrived in Down Royal with a lofty reputation, and hefty price tag, from the point to point field. He looked worthy of the high regard that day, and is hard to oppose. Stablemate The Very Man, has a similar profile. He's taken to follow Andy home.

Watch live coverage of the Fairyhouse Easter Festival on RTÉ 2 from 2.30pm on Monday, 22 April and from 3pm on Tuesday, 23 April.