Davy Russell admits that he felt more pressure than he'd ever experienced before in the build-up to this year's Randox Grand National.

Russell steered Tiger Roll into the history books as he became the first horse since Red Rum to win back-to-back renewals of the world’s most famous steeplechase.

The Cork jockey had the 4-1 favourite well positioned throughout the four-and-a-quarter-mile journey and after moving to the front, he found plenty on the long run-in to claim an historic victory.

There was a palpable sigh of relief from Russell and trainer Gordon Elliott after Tiger Roll crossed the finish line and Russell revealed afterwards that he had never felt as much pressure to deliver, as he did yesterday.

"There’s an awful lot of pressure on, it’s very difficult," he told RTÉ Radio 1's Sunday with Miriam. "I felt it a lot in the build-up, I felt it a lot because I knew he was the horse that could do it.

"There was the weight of two nations on him because English people have really got behind him as well as Ireland and I just felt that I didn’t want to leave the butcher or the taxi-driver that had their fiver on Tiger Roll.

"I felt I was riding for the whole country, it was an awful lot of pressure on and I just felt that it was something that was so hard to do but that Tiger Roll could do it. 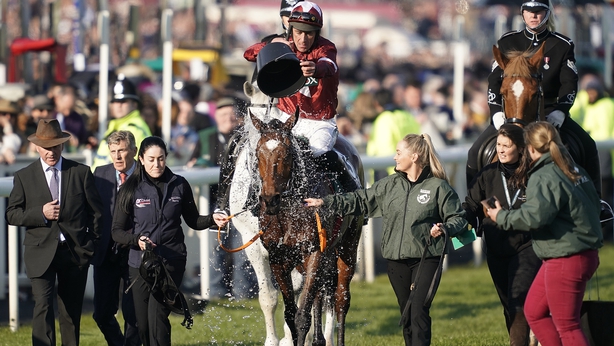 "It was probably the most pressurised race I ever gone into, for the reason I knew he could do it and everybody was behind him.

"It got to a point where the slightest thing could go wrong and it could upset so many people and I felt it this time, I really did feel it and I didn’t want to believe it."

Russell revealed that at one stage, he lost belief that Tiger Roll could complete the historic double as heavy rain fell over Aintree on Thursday and threatened to scupper his chance, but after his triumph the over-riding emotion was one of relief.

"The rain came on Thursday and I said ‘that’s the end of that’. Nobody wanted to listen to it, everybody said that Tiger Roll was going to win the Grand National and I just really, really felt it.

"I couldn’t believe then when he passed the line that all the weight of that had been lifted. When there are so many boxes you have to tick to win a race like that and to get it right, but as I said you can’t do it without the people around you.

"The people at home, like my own family, I could sense that they wanted to wish me the best of luck but they kind of left me alone to a certain degree."