Kemboy atoned for his early mishap at Cheltenham to run out a dominant winner of the Betway Bowl Chase at Aintree.

Fancied for the Gold Cup at the Festival, he got no further than the first fence - but on this evidence he would have given his Willie Mullins-trained stablemate Al Boum Photo plenty to think about in the blue riband.

His misfortune at least meant he arrived at Aintree a fresh horse, whereas Elegant Escape, who had a hard race in the Gold Cup, was always fighting a losing battle.

Gold Cup third Bristol De Mai and Clan Des Obeaux made errors, meaning they were never really on terms, and in truth there was only one moment of doubt for the winner when outsider Balko Des Flos jumped upsides at the third-last.

Kemboy was quicker away, though, and Ruby Walsh was still sat motionless. His jumping was almost faultless throughout and he sprinted away after the last to win by nine lengths as the 9-4 favourite.

"I rode him this morning, and he was mad well"

After his latest success for Mullins, Walsh was full of praise for Kemboy.

He told ITV Racing: "He was very good. I rode him this morning, and he was mad well.

"He settled well, jumped super - and while he got a bit close to the third-last, he was deadly.

"He had no luck in the Gold Cup - but this was the first time I've ridden him over fences, because I was injured all last year." 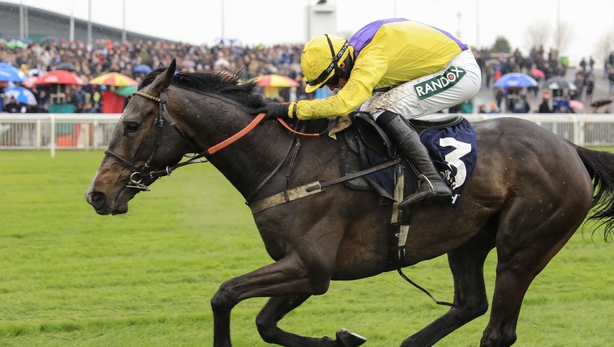 Kalashnikov presented trainer Amy Murphy with a first Grade One success in the Devenish Manifesto Novices' Chase at Aintree.

A top-quality field lined up for the opening race of the Grand National meeting - with Warren Greatrex's mare La Bague Au Roi sent off favourite to extend her unbeaten run over fences.

Having started the season favourite for the Arkle, the wheels fell off somewhat for Kalashnikov when he was beaten at Kempton and Sandown.

He then suffered misfortune at Cheltenham when Jack Quinlan was unseated after being badly hampered by a faller, and as a result he arrived on Mersyeside slightly under the radar.

Sent off at 4-1, Murphy's charge was stepping up to two and a half miles for the first time and took over from La Bague Au Roi heading to the second-last.

With the race seemingly won, he then made a jolting mistake which gave the mare and Mengli Khan a second bite of the cherry, but Kalashnikov flew the last to maintain his advantage.

While the petrol gauge on the winner was beginning to flicker close to the line, he held off the mare to win by a length and a quarter to provide the trainer and jockey with the biggest victories of their careers.

Pentland Hills followed up his Triumph Hurdle victory with a gritty display to hold off the front-running Fakir d'Oudairies in the Doom Bar Anniversary 4-Y-O Juvenile Hurdle at Aintree.

Sent off at 20-1 at Cheltenham having won his sole previous start at Plumpton, he banished any thoughts of his victory at the Festival being any kind of fluke.

He was surprisingly not the favourite, with that honour going to Joseph O'Brien's Band Of Outlaws, who also won at Cheltenham but lost his chance here by jumping sloppily throughout.

Just as he did at Cheltenham, Nicky Henderson's Pentland Hills (11-4) travelled extremely well for Nico de Boinville, although the favourite's stablemate, Fakir d'Oudairies, was not stopping in front.

Despite being just ordinary on the Flat, Pentland Hills has been turned inside out by a set of hurdles and a big leap at the last handed him the advantage.

To the runner-up's credit he battled all the way to the line, but ultimately went down by a neck. Christopher Wood lost his unbeaten record in third.

Fresh from a double at Cheltenham, Rachael Blackmore excelled once more as Moon Over Germany (11-2) made most of the running in the Close Brothers Red Rum Handicap Chase.

While Lady Buttons tracked the well-backed Irish raider into the straight, she could never quite get on terms and the concession of 13lb proved too much.

Henry de Bromhead's chestnut careered away for a 10-length win.

"He made my job easy, he jumped and travelled and was very impressive. Henry has always thought a lot of him so it's great he's done that today," said Blackmore.

De Bromhead said: "That was great. Superb ride from Rachael and just delighted to win it. He's a very decent horse.

"He just needed things to fall right for him and thankfully they did today. It was super."

Derek O'Connor appeared to have done everything right on Burning Ambition, who skipped the Cheltenham Festival in favour of this race over a shorter trip.

Top Wood, who took over at the third-last from Road To Rome, appeared a sitting duck at the elbow as Burning Ambition swept by, with his rider having sat motionless throughout.

However, Tabitha Worsley managed to get another effort out of Kelly Morgan's 12-year-old and the 14-1 chance was pulling clear at the line to win by two lengths, having finished second and third at Cheltenham for the past two years.

Fifth in the Weatherbys Champion Bumper at Cheltenham on her previous start, The Glancing Queen proved too good for her fellow mares - winning by two and a quarter lengths at 5-1 from favourite Minella Melody.