The seven-year-old had enjoyed a brilliant season, racking up a hat-trick of wide-margin Grade One wins in the Hatton's Grace at Fairyhouse, the Christmas Hurdle and Irish Champion Hurdle at Leopardstown.

She was the marginal favourite to claim the two-mile hurdling crown last Tuesday, but was under pressure from an early stage and passed the post well beaten in sixth place.

Elliott later revealed she had returned a dirty scope, and he is now concentrating on getting her back to form for next month's Punchestown Festival - where she is likely to have several options.

He said: "She scoped dirty after the race. We thought she was in great form going over - but to me, she was beaten after two hurdles.

"She stepped into the second hurdle, and she never looked happy at all afterwards.

"She'll be back for Punchestown, all being well - that would be the plan. She'll be entered in everything.

"Take nothing away from the winner (Espoir D'Allen). I don't know if any horse on the day would have beaten him - he was very impressive."

Apple's Jade was one of a few Elliott inmates who failed to run up to expectations in the Cotswolds, the most notable apart from Apple's Jade being the previously unbeaten Battleoverdoyen in the Ballymore Novices' Hurdle.

The Doyen six-year-old was the clear favourite under Jack Kennedy, but was in trouble a long way from home and was eventually pulled up.

Elliott added: "He never handled the track, and after two hurdles you could see him changing his legs.

"We scoped him after the race, and he was as clean as a whistle.

"He just didn't handle the track and was never happy. Jack was right to pull him up."

Of those beaten, Elliott was particularly encouraged by the performance of Delta Work - third in the RSA Insurance Novices' Chase.

He said: "We had a great week - and if this year was like last year when everything went right, we would have had seven or eight winners again.

"We hit the crossbar with a few horses that were second and third. If things went right a lot of them could have won.

"We obviously had a couple of disappointments - but when you send that number of horses over, you're going to have that.

"Overall, I was happy with all the horses. We have a few little niggly problems with a few of them, but 99 percent of them came home okay."

Of Delta Work, he added: "I'd say on a different day he probably could have won it.

"He's come out of the race well, and we're very happy with him. You'd imagine he'll go to Punchestown for the novice race." 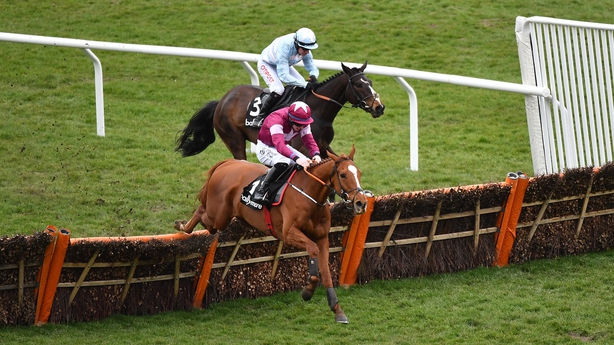 A notable absentee from Elliott's Cheltenham squad was, of course, the much discussed Samcro (above R).

The seven-year-old has not run since the turn of the year after being treated for a lung infection, but could return before the end of the season - with Aintree and Punchestown having previously been mentioned as options.

"He'll have a bit of work on Friday morning, and then I'll see what I do," said Elliott.

"I'm in no panic. (Owners' representative) Eddie O'Leary has left it completely up to me - and to be honest, I'm not going to put any pressure on myself.

"He's a good horse, and we'll look forward to get him chasing next year.

"There is every chance he could run this season, but nothing is in concrete."