Gordon Elliott believes Apple's Jade has gone from "strength to strength" this season as he prepares the mare for a crack at the Unibet Champion Hurdle.

The seven-year-old has won 14 of her 20 races, 10 of those at the highest level, but it was her performance in the Irish Champion Hurdle last time out which really cemented her star status.

A 16-length victory over the consistent Supasundae back down at two miles forced connections into a rethink and she is now set to tackle dual champion Buveur D'Air in the opening day highlight.

"She's come out of her last run very well. She'll have two more little bits of work and then it will be all systems go for the Champion Hurdle," said Elliott.

"We'll just keep her ticking away. She doesn't need to do a lot of work between now and then - she's pretty fit.

"I was nervous coming back against the geldings over two miles (in the Irish Champion Hurdle), but she showed how good she is.

Apple's Jade was a beaten odds-on favourite in the Mares' Hurdle at last year's Festival, and that had been her intended target until her most recent start.

"Before she ran the last day we were going for the Mares' Hurdle, but she was so good we said 'why not give her a chance at it?" said Elliott.

"It's a Champion Hurdle and we all want to win them.

"I don't know (if there's more to come). If she runs to the form she's been in all year, I think she'll run a big race in the Champion Hurdle.

"If I said she's going to win I'd be telling you a lie, but if she turns up in the form she has been for a last three runs, then I think she's got a great chance."

Apple's Jade was found to be in season after her defeats at Cheltenham and Punchestown last term, but her trainer hopes measures can be taken to prevent it from happening again.

"The whole world knows what was wrong with her - it's been well publicised she was in season both days," said Elliott.

"We're just hoping it doesn't happen again and keeping an eye and monitoring her.

"I'm not a veterinary surgeon. I leave it to them and the girls that look after her. They'll keep an eye on her cycle.

"I think she is thriving on her racing. I'd say that was one mistake I made with her last year (not running between Christmas and Cheltenham)." 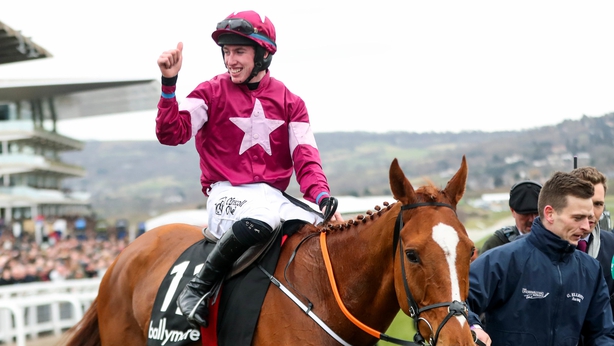 As to whether Samcro turns up at Prestbury Park is likely to be decided in the next 10 days - according to Elliott.

Last year's star novice hurdler has failed to win this season - at Down Royal, Newcastle and Leopardstown - and after defeat at the latter, it was revealed he was suffering from a lung infection.

He is now back in work with a possible tilt at the Stayers' Hurdle on the cards if all goes well.

"He has options in Cheltenham, in Punchestown and in Aintree.

"The next 10 days are important - I can't tell you any more than that."

The trainer is waiting on more evidence in Samcro's preparation to tell him if Cheltenham is on the agenda.

"He looks good - but until they do a good few bits of work, you don't know where you're going or what you're doing," added Elliott.

"It's not the be all and end all - if he gets to Cheltenham he does, and if he doesn't he could go to Aintree or Punchestown - or we could take the shoes off him and go chasing next year.

"No decision has been on where he's going yet."

"I won't be taking any chances with him," he said.

"If he is going to go (to Cheltenham) I'd imagine it would be the Stayers' Hurdle - but nothing is concrete.
"He had a lung infection deep down. It happens from time to time with good horses.