Bellshill just pipped Road To Respect in a thrilling finish to the Unibet Irish Gold Cup at Leopardstown.

A raft of non-runners on account of the fast ground reduced the field to just four runners, but racegoers were still treated to a fantastic contest.

Road To Respect was favourite for the race before the likes of Al Boum Photo and Monalee were taken out and was eventually sent off at odds of 5-6.

Sean Flanagan on Road To Respect was content to get a lead off the Ruby Walsh-ridden Bellshill on the first circuit, with the two Gordon Elliott runners, The Storyteller and Outlander, following.

Just after halfway Flanagan kicked into the lead but while he tried to break away, Road To Respect lost ground to his main rival at several fences down the back straight. 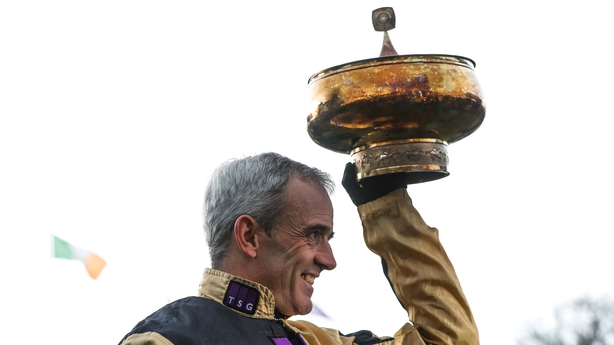 Nevertheless, a big leap at the last appeared to give Road To Respect the advantage as Bellshill (2-1) did not start gaining ground on him until the final 100 yards.

The gap closed with every stride and Walsh was in overdrive as the pair crossed the line together, with Bellshill getting the verdict in the photo finish.

The winner is now 12-1 from 20s with Betfair for the Cheltenham Gold Cup.

Mullins said: "We had few runners, but we had the quality runners and our fellow was great.

"He jumped brilliant and Ruby was great on him. We're very keen to take him to Cheltenham, he needed the run badly at Christmas."