Le Richebourg cemented his claims as a leading player for the Cheltenham Festival with a smooth display in the Frank Ward Solicitors Arkle Novice Chase at Leopardstown.

Joseph O'Brien's six-year-old was decent over timber, but he has taken his form to a new level over fences, notching his second Grade One win of the campaign.

His task was made a little easier as both Articulum and Paloma Blue were taken out before the race and then Gary Moore's British challenger Knocknanuss was an early faller.

Voix Du Reve and Us And Them took the field along, but Mark Walsh always appeared to be content in behind them.

Several accurate leaps helped him close the gap effortlessly and he cruised upsides before the last, with Walsh then urging him clear.

He won by seven lengths as the 11-10 favourite and stablemate Us And Them got closest, just as he had at Christmas.

He is now as low as 7-2 favourite in places for the Arkle at Cheltenham.

O'Brien said: "He jumped well on the whole and when he had to be clever he was. Mark gave him a lovely ride and he was very cool on him.

"There was a bit of drama throughout the race. I was delighted he was able to avoid that and he put in a good round of jumping. 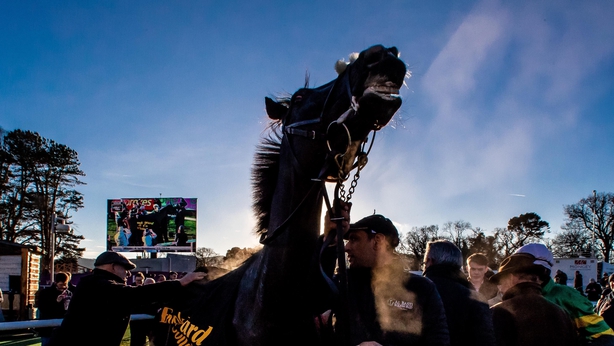 "They went strong and fast and it tested a lot of horses' jumping. He was good and clever at the last.

"Obviously he made a little mistake at the last here at Christmas and it was good to see him learn from that.

"A bit of nice ground is important to him. He was a good hurdler, he was fifth in the Galway Hurdle and we were a bit disappointed with him, but the form of the race has worked out unbelievably well since.

"He's very exciting and I'm delighted. He's won over two and a half miles. I think he needs a strong pace and we'll stick at two for the time being.

"We'll see how he comes out of it, but the Arkle now would make a lot of sense.

"It's going to be an even bigger test there and there'll probably go even faster. I couldn't be happier and winning a Grade One is massive.

"Us And Them ran a cracker and he jumps well. He's an outstanding jumper and would have a chance of going to the Arkle as well. Aintree might suit him too.

"We'll see how they come out of it and make a plan then."