Just as Aidan O'Brien dominated proceedings at Newmarket on Saturday, the Ballydoyle trainer proved virtually unstoppable at Naas on Sunday.

Like at Newmarket, O'Brien took the first three races on the card, with Magna Grecia looking a smart prospect in winning his maiden, Hermosa taking the Weld Park Stakes and Cypress Creek lifting in the Loughbrown Stakes, all ridden by Ryan Moore.

Star of the show, though, was arguably Japan, who, like Magna Grecia, earned Derby quotes as he got up close home under Seamie Heffernan to beat Moore-ridden stablemate and favourite Mount Everest in the Beresford Stakes.

In doing so he gave O'Brien an astonishing 18th success overall in the Group Two feature - won by some real stars over the years - and eighth in succession.

Mount Everest looked like justifying his position as the 11-8 market leader when he took over from Sovereign, O'Brien's third runner in the mile heat, but could not quite shake off the opposition.

Heffernan got a terrific response from Japan (11-2), who hit the front in the final few strides to get the verdict by a short head. The leading pair pulled three lengths clear of Michael O'Callaghan's Power Of Now in third, with Sovereign fourth.

O'Brien said: "You couldn't be happier. He followed the pace when the other two were going along.

"I thought he'd come forward again from today, he's a big, hardy horse, so he could be the type of horse for what was the Racing Post (Vertem Futurity Trophy at Doncaster).

"He travelled well and did everything right, so you'd have to be delighted with him really."

He added: "The second (Mount Everest) did nothing wrong and ran a lovely race, too. There were no prisoners taken and it was an honest straightforward race.

"We're all learning together. Donnacha's (O'Brien, Sovereign) is a massive big horse and they are all big middle-distance colts. The experience will do them really good."

Magna Grecia suggested his 340,000 guinea price tag might prove a snip in time in taking the Irish Stallion Farms EBF Maiden, showing a professional attitude to sneak through a gap on the far rail.

"You'd be delighted with that, he's a lovely horse," said O'Brien.

"He was just ready to start today. He's a possible for the Killavullan or something like that.

"He's a big, powerful, strong horse. I don't think you could ask him to do more than that, he was green but when he got straightened up he found plenty."

Hermosa (5-4 favourite) was rewarded for her fine run in the Moyglare Stud Stakes by landing the Weld Park Stakes.

Third in the Curragh Group One, the Galileo filly made virtually all the running as she went two places better in this Group Three heat over seven furlongs, and could now head for the Fillies' Mile at Newmarket.

"She's a lovely filly and she's coming with every run," said O'Brien.

"She's a lovely, laid-back filly and is learning with every run.

"I think she'll go for the Fillies' Mile. She crying out to go up to a mile."

The full-brother to Capri had finished last in the Irish St Leger on his previous start behind stablemate Flag Of Honour, but was much more at home at this level and over two miles.

"He's a horse that stays very well. He stays forever and will get much further than two miles.

"He's Kew Gardens' work companion and that will determine a lot of his time.

"Ana (daughter) rides him every day and I don't have much to do with him. Ana is more or less training him." 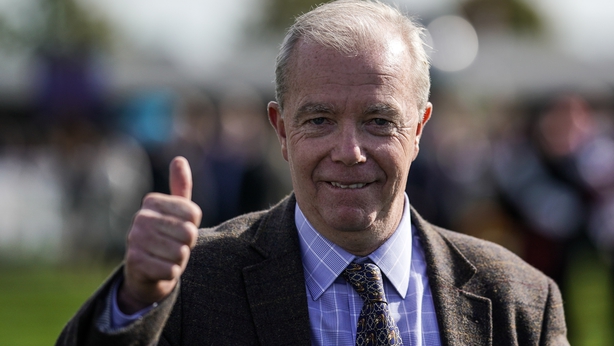 Making sure it was not quite all about O'Brien was North Yorkshire-based Karl Burke (above), who added to his Irish gains this season as Unfortunately finished with a real dash to deny Ballydoyle representative St Patrick's Day in the Renaissance Stakes.

Burke, who recorded a Group One double on Irish Champions Weekend, said of his 100-30 winner: "I'll have to speak to Chris Richardson (of Cheveley Park Stud) and the team.

"The only race now for him is the Ascot sprint (British Champions Sprint) and if that came up with a bit cut in the ground we have nothing to lose by having a go at that.

"I'd say he'll go to stud at the end of the season. He was a very good two-year-old last year and he's shown he's still got some ability now. I'm sure he'll do very well at stud and he'll be a very popular commercial little horse."