Michael Stoute believes patience has been the key to unlocking the true potential of Poet's Word as he heads into the Juddmonte International chasing a Group One hat-trick.

Now a five-year-old, he already has two of the biggest prizes of the season over different distances in the bag, the Prince of Wales's Stakes at Royal Ascot and the King George back there a month later.

He is now one of the highest-rated horses in the world, yet he began last season in a handicap on the all-weather.

"His work has been very satisfactory. He seems in good shape and we're looking forward to bringing him up to York," said Stoute. "He has won Group Ones at both distances so he seems to be an all-rounder.

"He is a very sound horse with a good mind. So he is an easy horse to train and the owner has let me bring him along quietly, which has suited him. So it has all fallen into place until now."

Poet's Word got the better of John Gosden's Cracksman in the Prince of Wales's, but with the ground drying out the Clarehaven handler takes him on with two three-year-olds this time.

Roaring Lion is his main hope having won the Eclipse last time out, while Without Parole needs to bounce back after losing his unbeaten record in the Sussex Stakes.

Jockey Oisin Murphy is in the middle of a purple patch and is hoping Roaring Lion extends it.

"The weight for age is kind and Roaring Lion is really well in himself. He's been working well and John's very happy with him, so I'm excited," said Murphy.

"He's a gorgeous horse, a joy to sit on, and obviously an exceptional animal. On ratings and everything his win in the Coral-Eclipse would have been a career best, but I think he has more to give."

Frankie Dettori believes Without Parole should feel the benefit of an extra two furlongs as he steps up to a mile and a quarter for the first time.

Dettori missed the ride at Goodwood through suspension, but is eager to be reunited with the Frankel colt after winning the St James's Palace Stakes at Ascot on his penultimate start.

He told his Ladbrokes blog: "I am really looking forward to riding Without Parole in the Juddmonte.

"I always thought that a mile and a quarter would be his best trip - it was a bit of a non-event in the Sussex Stakes.

"This looks a very strong race and it's the first time he runs at this trip, taking on these types of horses. That said, I won't be surprised if he runs a big race." 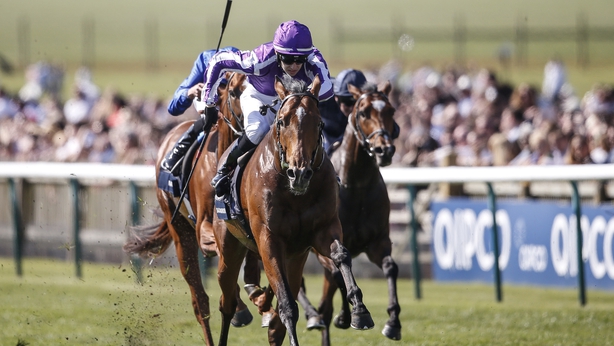 Aidan O'Brien's Saxon Warrior will be clashing with Roaring Lion for the fourth time in total, with the score currently standing at two-all.

Saxon Warrior came home first in both last season's Racing Post Trophy and the 2000 Guineas at the start of the season while Roaring Lion finished one place ahead when third in the Derby and beat Saxon Warrior a neck in the Eclipse last time.

"Obviously he had a bit of an easy time after Sandown, but he seems to be good form," O'Brien said.

A surprise winner of the Irish Derby was Joseph O'Brien's Latrobe, who runs in the colours of the stable's Melbourne Cup winner, Rekindling.

"He's in good form and after York we'll make a plan for the rest of the season," said O'Brien.

"The plan at the moment is York and then sit down and regroup after that.

Saeed bin Suroor fields two Group One winners of his own in Thunder Snow and Benbatl.

"I know the race is going to be very tough - the best quality horses are going to run. But both of them are doing well," said Bin Suroor.

"Thunder Snow's last race was the Dubai World Cup and we made a decision with Sheikh Mohammed just to give him a break - because he'd had four races in Dubai.

"Since the horse came to Newmarket he's doing well and working nicely. The horse is improving all the time and now he's fit, but he'll need the race and will improve for it.

"He needs the race before we take him to America. The target to start with is the Group One Jockey Club Gold Cup over a mile and a quarter at Belmont Park on 29 September. After that we'll take him to the Breeders' Cup Classic in Churchill Downs.

"Whatever happens in the Juddmonte will make him fit and ready for the future.

"I know he has won two Group One in France on turf, but on the dirt his action is much better.

"Benbatl has really improved physically this year. The key for him is that it has got to be good ground, really.

"He doesn't like fast ground or soft. He is doing well."

The field is completed by David Menuisier's Thundering Blue, a course and distance winner in the Group Two York Stakes and supplemented at the five-day stage at a cost of £75,000.