Aidan O'Brien feels Saxon Warrior will be much more at home at the Curragh when he bids to restore his reputation in the Dubai Duty Free Irish Derby on Saturday.

The Ballydoyle handler expects the Qipco 2000 Guineas winner to find the more straightforward track playing to the horse's strengths, whereas Saxon Warrior was caught out by the switchback course at Epsom.

The son of Deep Impact lost his 100 per cent record and the chance of a crack at the Triple Crown when only fourth to Masar.

O'Brien said: "He was a bit babyish at Epsom and a bit taken back by the track and everything. He'd always run on very uncomplicated tracks, and that was the first time he had to encounter anything like that.

"Ryan (Moore) said he was a little bit at sea coming down the hill and a bit unsure of himself. It was the same when he came into the straight, he never really got himself organised but he kept going.

"Everyone knows the Curragh is probably the fairest track in the world, and physically and mentally we are very happy with him and we think he should have learned a lot.

"The lads always do a beautiful job with the ground at the Curragh. The surface has been incredible all year."

Saxon Warrior will not be alone as O'Brien has pitched in Delano Roosevelt, Rostropovich and The Pentagon to support the hot favourite.

Dee Ex Bee finished two places ahead of Saxon Warrior when runner-up at Epsom and his trainer Mark Johnston has no qualms about his colt coping with the quicker conditions.

"There was cut in the ground at Epsom and we know he does handle cut in the ground, as he's won on soft ground before and it may inconvenience others," said Johnston. "At the same time, I would be pretty confident that he would handle fast ground.

"I've got the utmost respect, as everyone has, for Aidan. We are the one who finished in front (of Saxon Warrior) and we are the one who is guaranteed to stay. We are coming there more than hopeful."

The Masar team look to Old Persian to upstage the O'Brien battalion after he defeated Rostropovich and Delano Roosevelt in the King Edward VII Stakes at Royal Ascot last week.

Old Persian has taken that race so well that he was supplemented by trainer Charlie Appleby.

"He's got a nice, upward profile, and when horses start improving you don't know where the ceiling is," said the Newmarket handler.

"We'll find out more at the weekend. For a big, heavy-topped horse it's surprising how much he appreciates fast ground.

"Godolphin always want to be competing at the highest level, and thankfully that's what we have been doing this season. We have some nice three-year-olds and so far they have not let us down."

Dermot Weld is happy to give Bandua the opportunity after just two wins on soft ground in the spring.

"Bandua is right on course and I'm delighted with him. Everything is good and it's just whether he's good enough. He's an outsider," said Weld.

"The horse himself is physically in superb order and is entitled to take his chance."

Harry Dunlop is hoping a more suitable course and the plus of Frankie Dettori in the saddle will help see Knight Of Behold in a better light after the Lingfield Derby Trial winner flopped in the Derby itself.

"He seems in good form. Things at Epsom didn't really go his way, so we've kept on the Derby trail, taking on those horses again," said Dunlop.

"I just feel the Curragh will suit him better and we've got the assistance of Frankie Dettori which you can't knock in any way.

"He's come out of the race well. We've freshened him up and we'll see how good we are."

Joseph O'Brien won the Irish Derby as a jockey on Camelot and Australia for his father and goes for success as a trainer with Latrobe.

Camelot is the sire of Latrobe, who got off the mark in facile fashion when stepped up to a mile and a half on this course three weeks ago.

"He's in good form and we're looking forward to running him," said O'Brien.

"He won his maiden nicely at the Curragh last time.

"All his races have worked out pretty well. He's an outsider, but he's entitled to be there and we're looking for a good run." 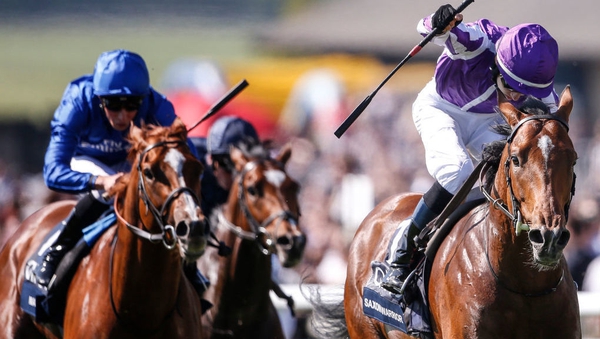