Aidan O'Brien knows what attributes a horse needs to win the Qipco 2000 Guineas and heads to Newmarket on Saturday with high hopes of adding to his record tally.

The Ballydoyle handler is triple-handed as he seeks a remarkable ninth success in the race, 20 years after King Of Kings opened his account.

He has taken two of the last three runnings and has another strong hand in the colts' Classic as he saddles Gustav Klimt, Saxon Warrior and Murillo.

"You have to have a pacey horse, they have to stay well, and usually they have to be straightforward," said O'Brien.

"It's a tough race and Newmarket is a tough track, especially at that time for a three-year-old. They have to be very classy and mature early."

Gustav Klimt certainly falls into that bracket, having already won a Guineas trial at Leopardstown in April.

The Ballydoyle handler said: "It was soft ground (in the trial) - very heavy, really - and probably not ideal, but we felt we needed to run him.

"We always thought he would prefer better ground and he did well to quicken in the ground.

"Ryan (Moore) rode him in the July meeting last year and was very, very full of him. You are never sure, but we were delighted with his run in Leopardstown. We think, and hope, he's in good form."

As an unbeaten Group One-winning juvenile, Saxon Warrior arguably fits the trend of recent O'Brien winners as he will be making his seasonal reappearance.

"We've probably never had a horse to change so much over winter as he has. He's turned into a monster of a horse - big, powerful and strong," said O'Brien.

"We think he will get further than a mile. It will be a nice place to start him and we look forward to him for the rest of the year.

"He looks a very unusual horse at the moment (in) how much he has changed from two to three, but we have to start somewhere." 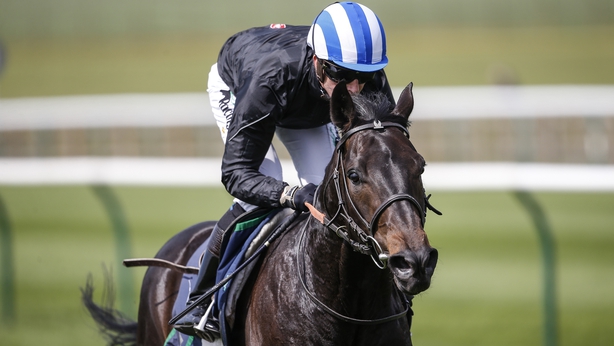 Without a doubt, the horse with the best breeding in the race is Mark Johnston's Elarqam, a son of 2012 Guineas winner Frankel out of 1000 Guineas heroine in Attraction, who was also trained by the Middleham man.

Johnston said: "Sheikh Hamdan (owner) and Jim Crowley (jockey) both believed last season that Elarqam would want a mile and a quarter this year, so we are going into the 2000 Guineas saying, 'This might not be the whole story'.

"But the Guineas is the best Derby trial and if he was not to finish in the first three, you could well see him going on to the Dante and possibly to Epsom.

"A few horses in the yard suffered with cracked heels and he was one of them but that has cleared up now and everything should be good. There's been no other issues."

"Most of his siblings have improved with a step up in trip as they have got older," said Scott.

"It's certainly a question that needs answering but I'd be fairly hopeful he gets the mile OK.

"All the 'Galacticos' are represented with some lovely horses and a lot are unexposed. I'm sure a star will be born on Saturday."

On having Dettori riding, he added: "Frankie has just got so much enthusiasm and he is riding with great confidence.

"He is a great friend of mine and the owner, so it's a massive asset."

Charlie Appleby's Masar was a hugely impressive winner of the Craven Stakes and his partner William Buick was suitably bowled over.

"He is a beautiful-looking horse and is beautifully bred and has got some good form from last year," said Buick.

"It will be a tougher test on Saturday, but he has done nothing wrong in this country this year."

John Gosden's Roaring Lion was odds-on favourite in the Craven but trailed Masar by some nine lengths.

Trainer John Gosden told At The Races: "He's come on a bundle since the Craven and I would expect the Guineas to be run as a proper mile race.

"I don't think Aidan's horses are going to hang about, so to that extent it will be a good, true test, which is what he wants."

The William Haggas-trained Headway was a superb winner over seven furlongs last time out but has to prove his stamina over a mile in the opening leg of the Qipco British Champions Series.

Haggas said: "If you look at the pedigree, the dam won over a mile and the sire won his Group One over a mile.

"In this case, you are not just hoping they stay the mile, but hopefully they improve for the mile.

"He's got a little turn of speed and if he uses that at the end he has a sporting chance in an open year."