Grand National-winning jockey Davy Russell says he "had to start afresh" after his sacking by Gigginstown stud owner Michael O'Leary but that he accepts his share of responsibility for a parting of ways that has proven no obstacle to further success together.

Despite losing his retained rider status in December 2013, Russell has continued to ride some of the Ryanair supremo's biggest horses. He won the Gold Cup on Lord Windemere and added the Grand National to his glittering CV with victory on Tiger Roll last Saturday.

Russell's successor Bryan Cooper was subsequently removed as number one rider last summer as the operation decided to allocate the maroon and white silks on a case-by-case basis.

"It's just one of those things (the dismissal). There were two reasons for it. I had to take some of the blame myself as well for that.

"It was as much to do with me as it did anything else so I just had to change things and start afresh.

"Luckily enough, Michael accepted that I was sill capable of riding horses and he was happy to put me back up on some of them." 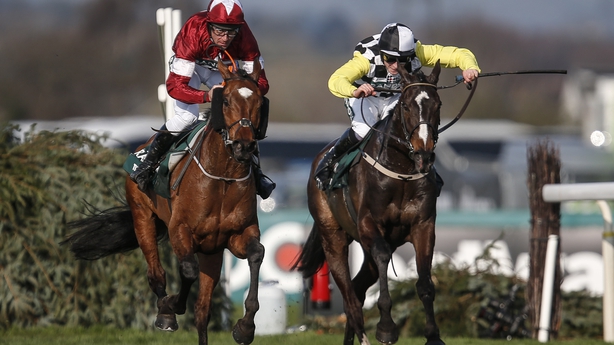 Russell piloted 10/1 shot Tiger Roll to glory at Aintree last weekend but it took a photo finish to confirm that he had held off the late charge of the Willie Mullins-trained Pleasant Company.

The Youghal man admits he thought he might have been caught,

"I wasn't sure because you'd be hoping you wouldn't see as much of the other horse from the corner of your eye," he said.

"I thought I was going to go ahead and win comfortably enough. Just the last 150-yards he started to tie up. He got a bit lonely out in front.

"I knew there was something coming, I didn't know what it was.

"I saw an awful lot of the other horse. Usually, you don't see as much of them as they go by you. Unless you're beaten.

"I thought I saw too much of him because he came back at me after the race."

In the aftermath of the race, Russell dedicated the win to friend Pat Smullen, the multiple Irish Flat Champion Jockey, who is believed to be battling cancer.

"He's going through a tough time at the moment, (it was) just to let him know that we're all thinking of him," said Russell.

"He's a great man, a great role-model for our sport.

"We're all behind him all the way. He's got a difficult journey ahead of him but i's nothing he hasn't faced before."

"She's always in my thoughts," he said. "She was a great woman and we're always thinking of her.

"It's a pity that she's not here to enjoy it with us all.

"The Grand National touches a world of people, and everyone who was ever involved with me in my career, hopefully they can feel a bit of it as well."

Russell will be confirmed Irish Champion Jockey for the third time, following the season finale at Punchestown later this month.

In the absence of the injured Ruby Walsh, he has streaked cleared and nearest challenger Paul Townend is a full 40 wins behind.

"Usually this time of year is very intense. It can be quite tight in the championship," said Russell.

"I've won it twice before but I haven't gone to Punchestown being clear winner, Ruby was always snapping at my heels.

"It's great to go there and not have that pressure."