Gordon Elliott and Tiger Roll soaked up the plaudits as the Randox Health Grand National heroes were treated to a rapturous welcome in the village of Summerhill in Co Meath on Sunday.

A remarkable eight-year-old, Tiger Roll added the world's greatest steeplechase to his CV when hanging on in a dramatic finish to emerge victorious by a head from the strong-finishing Pleasant Company, trained by Willie Mullins.

In doing so he gave Elliott a second win in the Aintree spectacular, after Silver Birch in 2007, and was adding to his three triumphs at the Cheltenham Festival.

A native of Summerhill, Elliott's pride and joy paraded down the main street surrounded by a couple of hundred people, in company with stablemates Bless The Wings, who was third, and General Principle, who landed the Irish Grand National on Easter Monday. 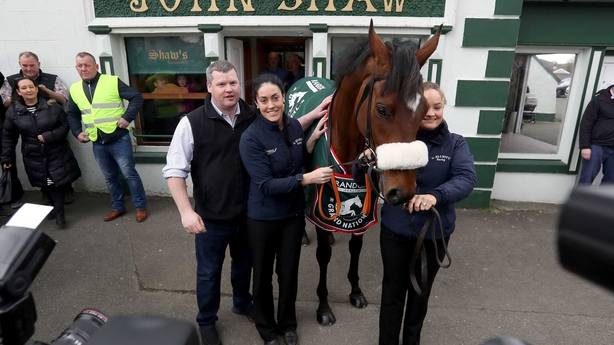 Elliott said: "It's unbelievable and it's only sinking in now when you get home and see all your family, friends and the crowd here in Summerhill.

Looking back on the race itself, he said of the Davy Russell-ridden winner: "Two hundred yards out I thought we were home and hosed and we were going to hose up. In fairness, he's only a small horse and in the last 50 or 100 yards he just hit a brick wall.

"Thankfully the line came in time. I wasn't sure he had won. When you aren't sure of the angles at a track, you are always very nervous. If it was in Ireland I could tell you the angles of every track.

"It was just a feeling of relief and it's great."

He added: "He's been a super little horse to win at three Cheltenham Festivals and then come back and win an English National. I'm very proud of him.

"We have good staff at home and Gerry Kelly the vet did a lot of work with him and also the physios. Everyone has done a great job with him.

"The girls will tell you he's a bit like a tiger at home. He can be in very good form or very bad. In fairness, he's allowed to be in bad form as much as he wants because he's a great horse.

"The cross-country race (at Cheltenham) was my plan all year and after that I thought he had a nice weight in the English National and we said we'd have a go at it.

"He's Keith's (Donoghue) ride, but he couldn't do the weight. He'll probably be back on him at Cheltenham next March in the cross-country race.

"If we could get back and win at Cheltenham, I'd be delighted. The chances of coming back and winning two Nationals are very slim."

Elliott's battle with Mullins for the Irish trainers' title was summed up by events at Aintree, as they dominated the finish. 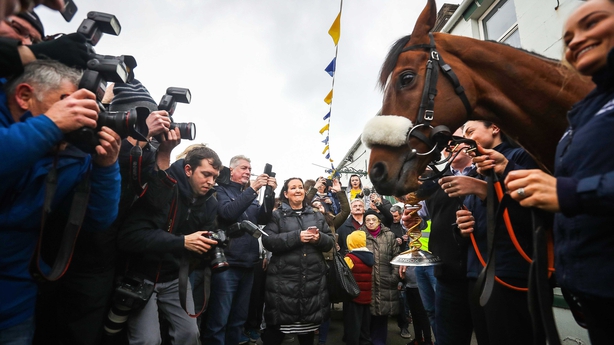 Elliott leads his big rival heading into the all-deciding Punchestown Festival as he seeks a first championship, and he smiled: "Whatever happens, I've had a great season, but if I could do it there would be a bigger party than there is here today!"

Tiger Roll is looked after at Elliott's yard by Louise Magee, who said: "It was amazing, something you dream about, just fantastic.

"We stood over in the middle of the track, so we could see the big screen, and it was a good spot to watch it.

"He's unbelievable. Everyone goes on about his size, but I think it's just all about his heart, he has just so much heart and leaves nothing behind.

'He's a star. He's grumpy, but very lovable. He's a little character. He'd let you know if he didn't want you in the stable. He's a funny, little quirky horse, but he's lovely.

"I've had fantastic times, especially this year, and rode a winner for Gordon (Up The Yard Challenge Race) and also had Don Cossack, but this is amazing.

"I'm part-time with Gordon for the past seven years and I'm from Summerhill."