Nicky Henderson bagged his fifth Grade One success in the space of two days as Santini emerged victorious in the Doom Bar Sefton Novices' Hurdle at Aintree.

The Seven Barrows handler enjoyed a top-level treble on Thursday with We Have A Dream, Might Bite and L'Ami Serge all striking gold on Merseyside, while Terrefort claimed victory in the Mildmay Novices' Chase earlier on Friday's card.

Henderson looked to have a strong hand in this three-mile contest, with 6-4 favourite Santini joined by stablemates Ok Corral, who was ahead of Santini when second in the Albert Bartlett at Cheltenham last month, and Chef Des Obeaux.

The latter was beaten before the turn for home, but Santini and Ok Corral were both in contention jumping the second-last, before Santini and Nico de Boinville forged clear near the stands' rail.

Dan Skelton's prolific mare Roksana emerged as his biggest threat, throwing down a strong challenge on the other side of the track after the final obstacle, but Santini was good value for the winning margin of a length and a half.

De Boinville said: "He's some horse. At Cheltenham we got shuffled back a bit and we were keen to make amends today by riding him nice and prominently on a flat track like this.

"Coming up the straight I thought I'd just try to get some better ground coming up the near side and it helped him a bit.

"He battled on well and he's going to be an out-and-out stayer."

Henderson said: "He's a baby of a horse and he's a chaser for next year.

"I nearly put him away after Cheltenham and he's been really fresh and well at home. It was a great performance." 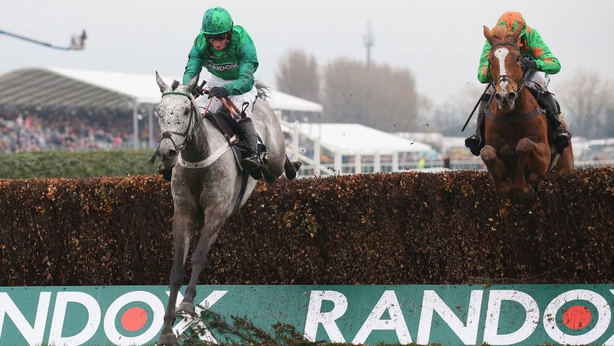 Terrefort stamped his class on the Betway Mildmay Novices' Chase at Aintree.

Nicky Henderson's grey progressed from winning a Huntingdon handicap to claiming Grade One glory in the Scilly Isles Novices' Chase at Sandown in February, and was last seen filling the runner-up spot in the JLT Novices' Chase at Cheltenham.

With that form having been well advertised since, Terrefort was the 3-1 favourite stepped up to three miles on Merseyside.

Daryl Jacob, fresh from a Grade One double at the meeting on Thursday, cut a confident figure in the saddle throughout and appeared keen to play his cards late.

Ms Parfois looked likely to prevail when striking on in the straight, but Jacob had not gone for everything on Terrefort and when he did, his mount responded generously to grab the lead and gallop three and three-quarter lengths clear after the final fence.

Elegant Escape was best of the rest in third.

"He's going to have a holiday. Effectively I put him away after Cheltenham, but the weather kept up like this and I thought 'why are we putting him to bed when he wants this ground?'.

"He loves this ground. He's the only horse I could promise you would go in that. I'm not saying he'd win, but I knew he would go in it. But literally after Cheltenham we were putting him away.

"He's got the trip (three miles and one furlong) well. Today's objective was to find out. It sets us up for next year and what we are thinking about now we know he stays.

"He'd run many times before Christmas in France, so he's had an awful lot of campaigning for a baby." 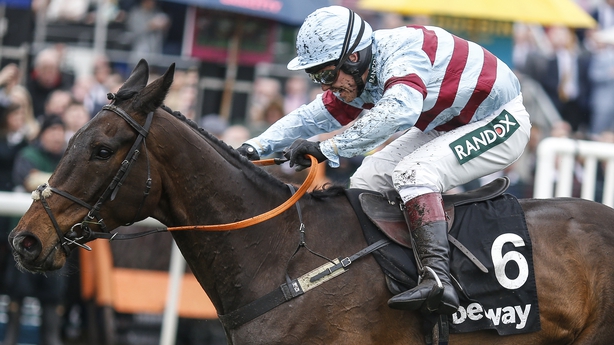 Lalor claimed an emotional success in the Betway Top Novices' Hurdle at Aintree.

The racing world was left shocked in January after it was announced trainer Richard Woollacott, who was based in South Molton in Devon, had died, aged 40.

Lalor provided Woollacott with his first big-race success when winning the Grade Two bumper at this meeting a year ago and he was a 14-1 shot to strike Grade One gold on his return to Merseyside, running in the name of the trainer's wife, Kayley.

With champion jockey Richard Johnson in the saddle, Lalor travelled strongly and moved to the front after jumping the third flight from home.

Bedrock briefly threatened to cause a huge upset, but Woollacott's charge kept up the gallop to prevail by two and a half lengths.

Woollacott said: "It's unbelievable, I don't know how that has just happened.

"It's a very emotional day, but obviously I've had a little bit of help from up there.

"This is a really special course for me and Richard, as we had some of our best days here. It's unreal, we love the horse and this is amazing."

Reflecting on a tough couple of months, she continued: "The horses have really kept everything going and me on the straight and narrow. They've been a big help and definitely having ones like him in the yard make you want to do it.

"I am so pleased for the owners, who have stuck by me. They are so loyal and it has worked out.

"I did say earlier 'I want to go home', I really did. Racing is one of the toughest games at times, but over recent months it has shown how amazingly supportive it can be - they really get behind you and look after you."