General Principle got up on the line to claim a thrilling renewal of the BoyleSports Irish Grand National at Fairyhouse.

Title-chasing trainer Gordon Elliott fielded 13 of the 30 runners in the three-mile-five-furlong showpiece in a bid to win it for the first time and significantly boost his hopes of being crowned champion trainer, with a total prize fund of €500,000 up for grabs.

For much of the way Bellshill looked in control of the race for reigning champion Willie Mullins, also aiming to win his first Irish Grand National.

Ridden by David Mullins, the eight-year-old looked to have everything covered before putting the brakes on approaching the final fence.

He managed to get to the other side, but the chasing pack mowed him down and just when it looked like his stablemate Isleofhopendreams was going to claim National glory, 20-1 shot General Principle and jockey JJ Slevin lunged late.

After a brief wait, the judge confirmed Elliott's charge had won the day.

Forever Gold and Folsom Blue were third and fourth respectively.

After looking into possible interference, the stewards promoted the Elliott-trained Folsom Blue to fourth place and demoted Bellshill to fifth. 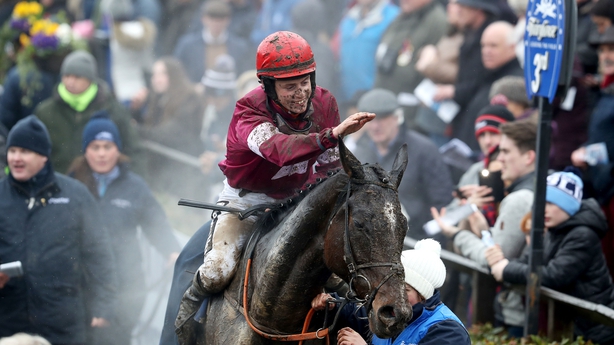 Slevin said: "I was doing my own thing, following the boys away.

"There looked to be plenty of carnage at the last fence - I think Bellshill nearly landed on it - and I was just trying to keep my horse going. He galloped away for me.

"I got a good run and got plenty of light. I left him popping away and kept saving.

"It's unbelievable. As a young lad you dream of riding in these kind of races and to win it hasn't really sunk in yet.

Elliott said: "He wasn't one of my leading horses, but it's great to win. He ran very well in the race last year (finished fifth), JJ gave him a great ride and it worked out great. I'm delighted.

"To be honest there were that many of them coming to the last, I didn't know where to look. I was watching Folsom Blue as he was coming home strong, but he got mowed out of it and was unlucky.

"We've had a rough enough week, hitting the crossbar with a good few, and to win this is brilliant.

"We'll enjoy it. I'd really need to watch it again to have a better idea what happened."