Invitation Only bids to provide Willie Mullins with a fourth successive victory in the JLT Novices' Chase at Cheltenham on Thursday.

The multiple Irish champion trainer has claimed the Grade One prize in each of the last three years with Vautour, Black Hercules and Yorkhill  and four times overall, with Sir Des Champs successful back in 2012.

Invitation Only, who like Black Hercules and Yorkhill carries the colours of Graham and Andrea Wylie, only made it as far as the fifth fence on his chasing debut at Punchestown in November, but has since won twice and finished a close-up third behind Monalee and Al Boum Photo in the Flogas Novice Chase at Leopardstown last month.

Patrick Mullins, assistant to his father, said: "Invitation Only ran a very good race in Leopardstown the last day. It's his first time travelling over to Cheltenham, but he seems to have settled in well.

"The ground shouldn't pose him any problems and the trip will suit him perfectly.

"We're very happy with him going into the race."

Mullins has a second string to his bow in Kemboy, who was the first Irish horse home when fifth in what is now the Ballymore Novices' Hurdle at last year's Festival.

The six-year-old opened his account over fences at the second attempt at Fairyhouse in January, despite blundering at the final fence.

Mullins junior added: "Kemboy ran very well here last year and on the whole he's a fantastic jumper. He schooled very well in Leopardstown the other day with Killultagh Vic.

"The race has cut up a bit and I think he has a good chance of finishing in the first four." 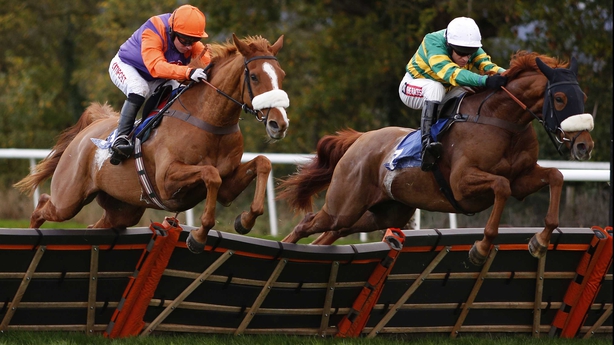 Modus bounced back from a fall at Exeter to make it three wins from four starts over the bigger obstacles with a cosy victory at Kempton.

However, the prospect of testing conditions is a slight worry for trainer Paul Nicholls.

He said: "I wouldn't want too much rain, but he is in good shape. I'm just a bit worried about the ground that's all.

"It's Cheltenham and we've got to take our chance. He has done nothing wrong all season, but I would fancy him more on better ground.

"He popped round Kempton well last time and did everything right."

Gary Moore has high hopes of his runner Benatar, who has yet to taste defeat in three races over fences.

"The horse I'm looking forward to running most at Cheltenham is Benatar. The more rain, the merrier he is," said the West Sussex trainer.

"He was not quite right for the Scilly Isles and the reason I didn't run him at Kempton in the Pendil a couple of weeks ago was it was too close to the Festival.

"I want to run him fresh as, for me, his his best run of the season was his first run at Ascot. I think he is very good."

Benatar claimed the scalp of the Colin Tizzard-trained Finian's Oscar at Ascot in December and the latter is on a redemption mission having flopped in the Cleeve Hurdle at Cheltenham in January.

His team is hoping the application of cheekpieces will have a positive effect on the six-year-old, who is also having his first start since undergoing wind surgery.

"He schooled in them last week and they certainly had the right effect on him," Joe Tizzard, assistant to his father, told At The Races.

"It's too soon to write him off. He's only had one bad run and that was on desperate ground when our horses were wrong.

"He's had a little wind operation since then, he looks a million dollars at home and he's got a big engine.

"You just hope the cheekpieces will stop him losing a couple of lengths at every fence, which is sort of what has been happening."

The Tizzard team are also represented by West Approach.