The Willie Mullins-trained Total Recall heads up a 40-strong Irish representation for this year's Randox Health Grand National at Aintree on 14 April.

Total Recall was the winner of this season's Ladbrokes Trophy and is one of ten horses entered by the Co Carlow handler, with the likes of Polidam and Rathvinden also engaged at this stage.

Gordon Elliot also has ten involved, including Down Royal Grade one winner Outlander and last year's runner up Cause Of Causes and Bless The Wings.

Ante-post favourite Blaklion features among the 105 entries for the Merseyside feature.

The 2016 RSA Chase hero was the market leader for last year's renewal as an eight-year-old and was far from disgraced in finishing fourth behind One For Arthur. 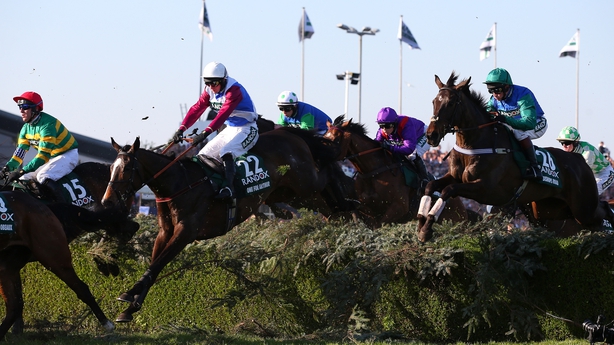 Blaklion has taken his game to another level this season, filling the runner-up spot behind stablemate Bristol De Mai in the Charlie Hall at Wetherby before dominating his rivals in the Becher Chase over the National fences in December.

He is the clear 10-1 favourite to provide trainer Nigel Twiston-Davies with a third National success following the victories of Earth Summit (1998) and Bindaree (2002).

A stellar 105 entries for the £1-million @RandoxHealth Grand National at @AintreeRaces on Saturday, April 14.

Definitly Red was pulled up when well fancied last April after his saddle slipped. Brian Ellison's charge appears a major contender once more after running out an impressive winner of the Cotswold Chase at Cheltenham on Saturday - although he will first return to Prestbury Park for the Gold Cup in March.

Kim Bailey's 2016 Grand National runner-up The Last Samuri is prominent in the market once again.

The Grand National weights will be unveiled on the evening of Tuesday, February 13, during a special ceremony at BAFTA in London's West End.