Simply Ned was awarded the Paddy's Rewards Club Chase at Leopardstown after odds-on favourite and first-past-the-post Min was relegated to second for causing significant interference.

The pair came extremely close together after jumping the last, with Nicky Richards' race regular Simply Ned going for a daring run up the rail under Mark Walsh.

Min, who had made virtually all the running, first appeared to bump Simply Ned not long after the last before again leaning on him with the winning post in sight.

That clash forced Simply Ned into the rail, sending some pieces of plastic flying, and following a lengthy deliberation, the stewards opted to reverse the placings.

To compound Townend's misery, he was also handed a two-day ban for careless riding.

A look at why exactly why Simply Ned was awarded the Paddy's Rewards Club Chase at Leopardstown ahead of odds-on favourite and first-past-the-post Min #RTEracing #RTEsport pic.twitter.com/VxQhPhOSu1

Min had been sent off the 2-7 favourite for the two-mile-one-furlong heat but he had been forced to work hard to fend off Simply Ned, eventually passing the post with half a length to spare.

For 16-1 shot Simply Ned it was a long-awaited triumph as, having placed in the last three renewals of this race, he finally enjoyed his day in the Grade One spotlight.

Walsh said: "You don't want to win a Grade One like that but I felt with a clear run I'd definitely have won. He (Min) impeded me the whole way up to the line.

"I jumped the last behind Paul (Townend, Min's jockey) but there was plenty of room.

"When the rail came Paul started leaning on top of me and there was a significant bang quite close to the line. He broke the line and was impeded really badly.

"Fair play to connections, they kept bringing him for this and I must thank Davy Russell for getting me the ride." 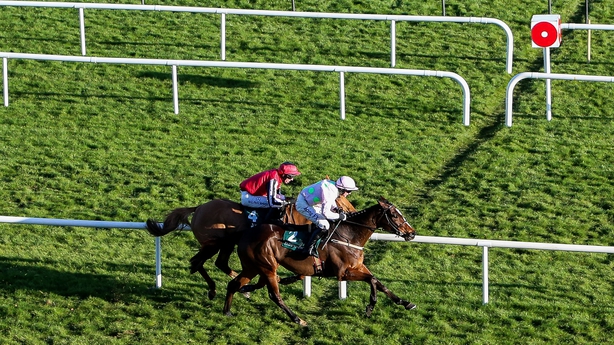 Richards said: "The other horse clearly gave him a couple of bumps and the second one was a fairly hefty one.

"Mark came in and was adamant he would have won the race. The old horse was coming and I'd say justice has been done.

"Mark gave him an absolute peach of a ride. What a ride he gave him and he did absolutely everything he was asked. It will probably be the plan to come back here in February."

On winning a Grade One with Simply Ned, the Greystoke handler added: "It's took a bit of doing but we got there at the end of it.

"He's been a great horse and we bought him up the road at Fairyhouse.

"He cost €23,000 and was for nothing, really. He's been a great horse and very consistent at a high level. It's great that he'd had his day at the top."