It is looking increasingly likely that dual 2000 Guineas winner Churchill will run in the Breeders' Cup Classic at Del Mar.

Aidan O'Brien's colt, who has not tasted victory since following up his Newmarket Classic win at the Curragh, finished third in the Queen Elizabeth II Stakes to Persuasive at Ascot on Saturday after meeting trouble in running.

"There is a big chance Churchill will go for the Classic. He seems to have come out of Ascot very well," said O'Brien.

"He jumped smart in that (QEII) and Ryan (Moore) got him into a lovely rhythm. He just got tightened a little bit going into the two when he started to build into his rhythm.

"Ryan felt he never got into top gear, but he went to the line very strong. He seems to have come out the race well and we look forward to what is going to happen.

"He is very like Giant's Causeway. He is miler that you would like to think will get a mile and a quarter.

"He is big and powerful, like those dirt horses."

"Ryan felt he never got into top gear, but he went to the line very strong."

Churchill may be joined in the Classic by War Decree, last seen winning a Group Three at Dundalk.

"Ryan rode War Decree in the French Derby and really liked him. We gave him a good break in the middle of the summer and just had the run at Dundalk," said O'Brien.

"Donnacha (O'Brien) rode him and really liked him, he travelled well and won very easily. It would be his first start on dirt, but that would be interesting. This is a massive step up from that, but he seems to have come out of that well."

Highland Reel won the Turf last year and looks like a major player once more after a good run in the Champion Stakes.

"We just felt Highland Reel needed the run last week as it had been a long time since he ran. He has come out of the race well. Ryan was over the moon with him in the race and he kept him out (wide) as long as he could. He loves that nice ground he should get," said O'Brien. 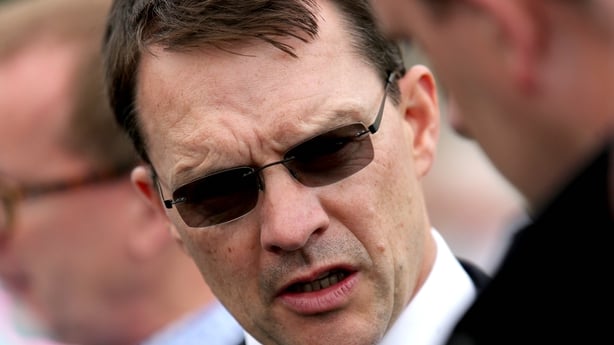 Rhododendron and Roly Poly have a choice of engagements, and O'Brien also looks set to be well represented in the two-year-old races in America.

"Happily had a little bit of a blip before her last run (Fillies' Mile), but she seems to be fine now. After a few days she was fine and all her bloods seem to be fine now. We were delighted with her on Arc day," said the Ballydoyle handler.

"September had a nice run in the Fillies' Mile. She ran a very good race, but she didn't get a clear run. She is by Deep Impact and I think they handle quicker ground. She had a few lesser runs in between, but her last run was she was coming back after a little break and the ground was a little slower as well.

"Mendelssohn and US Navy Flag are in both races (Juvenile Turf and Juvenile). US Navy Flag would have the option of either and he could go on to the dirt. Mendelssohn would not have the experience of him and would probably go on the grass, but I am not sure which way yet."