Aubrey McMahon punched the air after steering Whiskey Sour to a clear-cut victory in the Connacht Hotel Handicap at Galway.

Confined to amateur riders, the 100,000 contest is the traditional feature on the opening night of the seven-day Festival.

Whiskey Sour, who is owned by the winning rider's father Luke McMahon, had made a successful debut for Willie Mullins in a maiden hurdle at Tramore in early June and was a 16-1 shot switched back to the Flat.

However, having been ridden patiently, Whiskey Sour came round the front pair to lay down his challenge before kicking two and three-quarter lengths clear.

Swamp Fox beat Lagostovegas to the runner-up spot by a head to deny Mullins a one-two.

McMahon said: "Everything went so smooth. It was like a dream really.

"Amateurs that ride all their lives dream of winning this race.

"It's great to even get a ride in a race this. To win it is brilliant and I can't really believe it's happened."

Mullins was full of praise for the rider. "Aubrey was fantastic. For a 7lb claiming rider with so little experience to ride a winner like that is fantastic," he said.

"It was fantastic for him and for Luke, who is a great patron of the stable. I'm sure it'll be one of Luke's best winners.

"The horse has won here before and had a lovely weight with Aubrey's 7lb claim.

"He's in the mile-and-a-half handicap on Friday (Guinness Handicap). I'd say he'll go on Friday now."

Barry's back! Geraghty wins on his return from injury under Le Richebourg in the opener at the #GalwayRaces pic.twitter.com/jzM5ktqSn6

Barry Geraghty made the perfect return from injury by steering Le Richebourg to victory in the curtain-raising Galwaybayhotel.com & Radissonhotelgalway.com Novice Hurdle.

The leading rider had been out of action since breaking his arm in a fall in the Irish Grand National on Easter Monday, but was keen to be be back in the saddle for the Festival at Ballybrit.

The Joseph O'Brien-trained Le Richebourg was the 4-9 favourite to make it three from three over obstacles and did so by a comfortable five lengths from Twobeelucky.

"He's a grand horse and Barry gave him a lovely ride," said O'Brien.

"He's a National Hunt-bred horse and he's running against horses off the Flat, so that would be playing into their hands. He's exciting.

"We might look at a race at Tipperary in October."

Local trainer Shane Ryder's Pateen was a 20-1 winner of the Easyfix Handicap Hurdle in the hands of Paddy Kennedy.

Ryder said: "This is my Cheltenham and it's great.

"This is my first winner at Galway. I rode here a few times as an amateur with no joy.

"I train in a little village between Ballinasloe and Portumna and I've 12 horses in. I might get one or two more now." 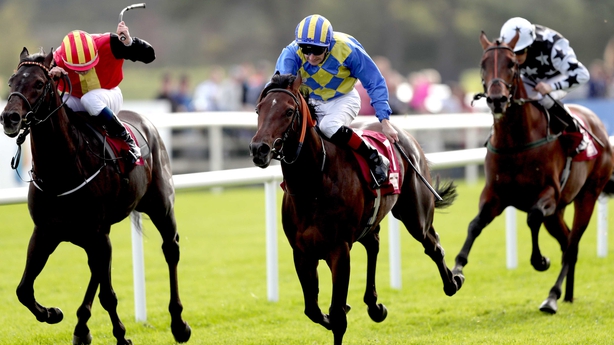 There was a thrilling climax to the Claregalwayhotel.ie (C & G) Irish EBF Maiden, with 14-1 shot Spiorad Saoirse and Declan McDonogh getting the better of Quizical by a short head.

Winning trainer Andrew Slattery said: "He was a bit coltish on his debut in Cork (finished fifth) so we decided to geld him and he's improved.

"It was the owners who wanted to come here really, I thought he wanted another two weeks

"He worked well last Tuesday after working moderately in the Curragh the week before. That's obviously brought him on and there should be improvement to come.

"We'll look for a nursery now."

Twist Of Magic looked home for all money after cruising to the front and taking a couple of lengths out of the field, but she began to tread water in the final furlong and 12-1 shot Dinky Inty got up to beat her by a head under Gary Halpin.

Doyle said: "I thought this place would play to her strengths. She's real tough and the rain was a help, too

"She's in here again on Friday night over a mile and if she's good she might come back again."

Trainer Pat Fahy and jockey Billy Lee combined to land the Eventus Handicap with 6-1 shot Pearl Of The West.