Classic also-ran Spirit Of Valor found his niche with a convincing all-the-way win to complete a Group Two double for Aidan O'Brien in the Qatar Airways Minstrel Stakes at the Curragh.

Unplaced in both English and Irish 2000 Guineas won by his stablemate Churchill, Spirit Of Valor had belied his odds of 66-1 when second in the Jersey Stakes at Royal Ascot on his latest start.

He showed that effort was no fluke with a fluent success. Ryan Moore was able to dictate affairs on the 5-2 joint-favourite, who crossed the line with a length and three-quarters to spare over British raiders So Beloved and Stormy Antarctic.

It's a quick Group 2 double for Aidan O'Brien as Spirit Of Valor wins the Qatar Airways Minstrel Stakes at @curraghrace: pic.twitter.com/YTHgjoQawi

"He had a very good run in Ascot. We tried him at a mile the first day and it was stretching him a bit. Then we came back to a mile on soft ground. We might have a look at the Lennox in Goodwood or something like that.

"There's no doubt he's improving. He's by War Front so he would like nice ground and the reason they do is because they are all fast horses." 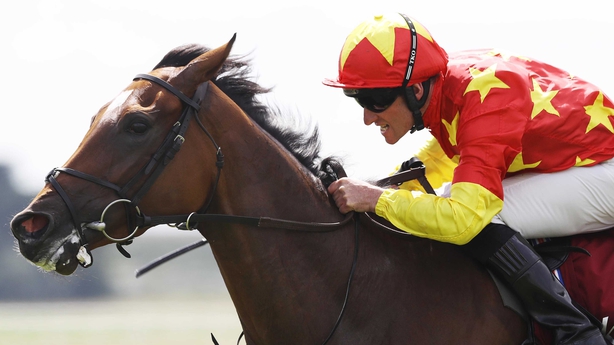 Elizabeth Browning (12-1) had initiated the O'Brien brace when coming from last to first to land the Kilboy Estates Stakes under Seamie Heffernan by a length and three-quarters from the Martyn Meade-trained Wilamina.

"She's a filly we've always thought had a lot of ability and she missed a lot of lines," said the Ballydoyle handler.

"She'll stay a bit further, she was coming home well."

O'Brien's sons, trainer Joseph and jockey Donnacha, teamed up with Kamili (7-2) to take the Curragh 'Where Champions Are Made' Fillies Maiden.

"She's been improving with every run. She was a slow learner, but we think she's on the right track," said the winning trainer.

"We think she's a very nice filly, she's a very well-bred filly, and she's after winning a Curragh maiden now. We'll step her up in class now and see what happens."

Dawn Delivers (4-7 favourite) could step into Pattern company after opening her account in the Irish Stallion Farms EBF Fillies Maiden.

The Jim Bolger-trained youngster had taken on colts when second in her previous two starts, but made no mistake against her own sex as she held promising O'Brien newcomer Magical by half a length under Kevin Manning.

"That's job done. She'll stay further and we might look at the Silver Flash Stakes (at Leopardstown) with her," said Bolger.

Surrounding (9-1) just got the better of Stormy Belle in a thrilling finish to the Irish Stallion Farms EBF Fillies Handicap.

Mick Halford's runner pulled out that little bit more for Shane Foley to prevail by a neck.

"I'm delighted. She got struck into behind at Limerick and we lost a lot of time with her. She's a big, genuine filly," said Halford.

"She's very game and we'll probably run her in another handicap. Hopefully she keeps improving and eventually we'll take a chance one day in a Listed race as the owners have all the family."

Zeftan (9-2) got up close home to deny Mandatario in the two-mile Killashee Handicap, just 24 hours after finishing fourth over a mile and a half of the Kildare track. Adrian Keatley's eight-year-old snatched a neck verdict under 7lb claimer Danny Sheehy.

"Hopefully we'll keep coming back here with him. There is no point going anywhere else."

Johnny Murtagh's Golden Spell (11-4 favourite) defied top weight with a smooth display as she gave upwards of 10lb to her rivals in the Plusvital Speed Gene Nursery Handicap.

Her rider Colin Keane said: "The step up in trip was ideal for her. We'll see what the handicapper does now, but she might have to try to go and get a bit of black type."