Pat Smullen has been booked to ride Cracksman in Saturday's Dubai Duty Free Irish Derby at the Curragh.

With regular pilot Frankie Dettori currently sidelined by injury, John Gosden was in need of a new rider for his Epsom Derby third as he has a second shot at Classic glory.

Gosden has wasted no time in securing the services of Smullen, who will be bidding for a third Irish Derby success following Grey Swallow in 2004 and Harzand last year.

Smullen's agent Kevin O'Ryan said: "He has been booked to ride Cracksman. He's an absolutely brilliant ride to get."

Cracksman is one of 12 colts still in contention following the confirmation stage.

Cracksman's trainer John Gosden won the 150th renewal of theDerby with Jack Hobbs in 2015 and he is excited to see his colt renew rivalry with Epsom Derby winner Wings Of Eagles, one of eight left in the race by trainer Aidan O’Brien.

"Cracksman is in great form and I’m very happy with him. All being well we are going to the Curragh on Saturday, it is a lovely track and I think it will suit him.

"They are two very nice horses from Epsom and I thought Wings Of Eagles was impressive in the Derby.

"I’m very clear in my mind that he would have been an unlucky loser as he was stopped twice in running and still won it at the finish. I don't think it was a fluke but the pair of them are nice horses and it will be great to see them meet up at the Curragh." 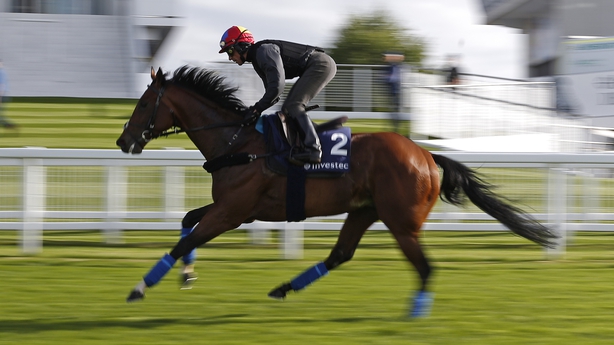 The Jim Bolger-trained Dubai Sand and Grandee from Jessica Harrington's stable make up the home team.
The field is completed by Andre Fabre's French challenger Waldgeist.

Legendary French trainer André Fabre will bid to win the Derby for a third time this weekend with Prix du Jockey Club runner-up Waldgeist set to line up for the €1,500,000 showpiece.

Fabre won the race in 1995 with Winged Love and 2005 with Hurricane Run and he is hopeful of a big run from Waldgeist, who was a Group 1 winner last season.

"It doesn’t seem that any horse is able to be the best by 3lbs or 4lbs, they all seem to be very much together, so that is why I am taking my chance. I think it is a good opportunity for him." Fabre said.

"He stays well, he has a big heart and he has a good acceleration as well as the ability that he has already shown.

"I’m a great fan of the Curragh. It is a beautiful track, well designed, you cannot be unlucky as it is a very fair course."

Watch live coverage of the Dubai Duty Free Irish Derby on RTÉ One from 3pm on Saturday 1 July. Live radio commentary on the day's action on Saturday Sport on RTÉ Radio 1 from 2pm.