Caravaggio maintained his unbeaten record with a superb display in the Commonwealth Cup at Royal Ascot.The six-furlong contest was billed as one of the races of the week, as the Aidan O'Brien-trained

Caravaggio, so impressive in the Coventry Stakes at last year's meeting, took on a couple of major Godolphin-owned contenders in Harry Angel and Blue Point.

O'Brien said: "He's obviously a brilliant horse. It was only his second run back and we've been afraid to do too much because we didn't want to lose that brilliance that he has. Ryan (Moore, jockey) gave him a brilliant ride and his change of pace is unbelievable.

"He's very quick - I don't think we've ever had a quicker horse. It was a big step up from his first run at Naas. We knew it was against three-year-olds today but it will be older horses next time."

O'Brien went on: "I'd imagine the July Cup is what the lads would be thinking of."

When asked if he could drop back to five furlongs at some stage, O'Brien quipped: "He could drop down to three!"

Just as he had done when bolting up in last month's Sandy Lane Stakes at Haydock, Clive Cox's Harry Angel was soon racing enthusiastically at the head of affairs and ensured a strong pace.

Blue Point, trained by Charlie Appleby, had beaten Harry Angel in the Pavilion Stakes over the course and distance in early May and loomed up to challenge inside the final furlong.

Harry Angel managed to see him off on this occasion, but had no answer when the more patiently-ridden 5-6 favourite Caravaggio stormed by late on and there was three-quarters of a length between them at the line.

Harry Angel was in turn half a length in front of Blue Point, with the trio pulling nicely clear of American challenger Bound For Nowhere.

"There's quite a head wind and it's hard to make up ground in it today and yesterday. They made him work but he was going away at the end. They were very good horses in front of me and they weren't stopping.

"I think that was a very good performance as he's beaten two very good horses. He's a good colt.

"I ride Limato on Saturday so we'll see how he matches up to the older ones, but that was a very good race." 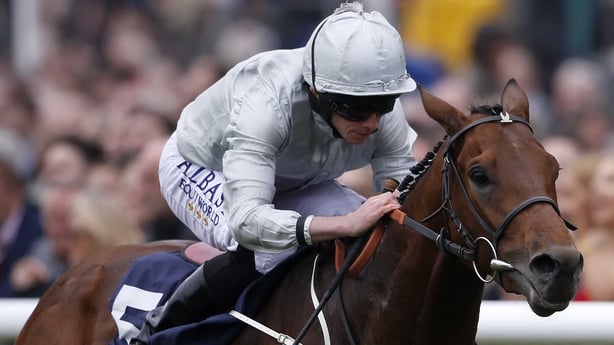 Permian is on the trail of a success at the top level after picking up his second Group Two in the King Edward VII Stakes.

He put a line under a disappointing run in the Investec Derby, for which he had been supplemented after winning the Dante Stakes at York, with a sterling performance.

Sent on by William Buick rounding the final bend, the son of Teofilo fought off all challengers to hold Khalidi by half a length.

Buick completed a double when Rare Rhythm (20-1) overcame a 371-day absence to win the Duke of Edinburgh Handicap.

He had not raced since finishing eighth in the same race 12 months ago but was primed to perfection by trainer Charlie Appleby to strike by two and a quarter lengths from Appeared, giving Godolphin a sixth winner of the week.

There was success for the little-known French trainer Matthieu Palussiere, who supplied a 20-1 surprise with Different League in the Albany Stakes.

Despite having won both of her previous two starts, she was an outsider for the Group Two heat, but showed plenty of dash to come out on top by a neck in the hands of Antoine Hamelin from Jessica Harrington's previously unbeaten Alpha Centauri.

A revamped Queen's Vase went to the John Gosden-trained Stradivarius (11-2), who got up to late to strike under Andrea Atzeni.

Dropped in trip from two miles to one and three-quarters and promoted to Group Two status, the race provided a thrilling finish with the upped in class Stradivarius denying Count Octave by a neck with Secret Advisor third.

The first three might meet again in the St Leger at Doncaster in September.