Dual 2000 Guineas hero Churchill was only fourth as Barney Roy enjoyed his day in the sun in the St James's Palace Stakes at Royal Ascot.

Just a length had separated the pair when they finished first and second at Newmarket in early May, but having since followed up at the Curragh, Aidan O'Brien's Churchill was the 1-2 favourite to confirm his superiority over the Richard Hannon-trained Barney Roy (5-2).

Racing Post Trophy winner Rivet took the eight-strong field along for much of the one-mile journey in the feature race on the opening day of the meeting, closely pursued by Churchill's stablemate Lancaster Bomber.

The two big guns were happy to play their cards late, but it was clear from early in the straight that Churchill was not going to pick up the leaders.

Barney Roy was himself being ridden along from over two furlongs out, but responded to James Doyle's urgings and got up to score by a length.

Lancaster Bomber was second, ahead of Thunder Snow in third.

Hannon said: "I thought he was off the bridle a bit early and I was a little worried that he was going to run a moderate race and finish fourth, but I've got a lot of confidence in this horse and I'm delighted. 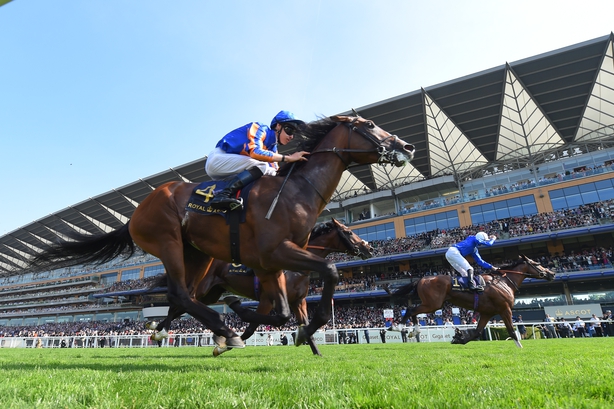 "I was confident he'd run his race, not confident he'd win - I just wanted to give him the chance to prove that, as I don't think he got that chance in the Guineas.

"There isn't another Guineas to go at, but that is a good pot and Sean Levey, who rides him at home, has done a good job."

Asked about future plans, Hannon said: "He's in the Eclipse, he's in the Arc.

"He takes time to get there but he picked up well, he's a very relaxed horse and was only having his fourth run, so to beat the Guineas winner is great."

Doyle said: "It's been an up and down season and when I knew I'd got the ride on this fellow I was pretty excited.

"He felt good at Newbury (Greenham) but it didn't go our way in the Guineas. He's proved what a good horse he is there.

"When we jumped out of the gate my tack slipped back a bit, which was a bit of a worry, but he stuck at it well off the turn.

He added: "This is why I joined the team (Godolphin), to ride big winners like this, so to ride one when he (Sheikh Mohammed) is here today makes me feel very proud.

"I'd been watching Churchill's races to find a chink and it didn't look like there was, but he was either an outstanding one who just did enough or just a good horse, luckily he was just a good horse and we've got one a bit better."

O'Brien said of the beaten Churchill: "He ran well. His form with Lancaster Bomber changed a bit from what it usually is. He should like fast ground really.

"It is a very hot day and maybe the heat and change didn't help. He just didn't pick up for some reason. We don't know the reason but we will hopefully know sometime."

Of the runner-up, he added: "Lancaster Bomber ran very well. Churchill is usually able to pick up Lancaster, but he just didn't today."