Churchill completed a Classic double with a comfortable victory in the Tattersalls Irish 2,000 Guineas at the Curragh.

Last season's champion juvenile after winning five of his six starts, Aidan O'Brien's colt made a successful reappearance in the 2000 Guineas at Newmarket three weeks ago and was a prohibitively priced 4-9 favourite to follow up back on home soil.

His stable companions Lancaster Bomber and Spirit Of Valor gave him a nice lead into the race and while Godolphin's Thunder Snow did his best to make a race of it, Churchill ultimately saw him off by two and a half lengths under Ryan Moore in the rain-softened ground.

Moore said: "He's been such a pleasure to ride from day one.

"We went a good gallop and he relaxes so well, but you could just tell he wasn't really enjoying the ground.

"I had to pick him up and when I asked him, he picked up Christophe (Soumillon, on Thunder Snow) a lot sooner than what I expected him to do.

"I think he's a very talented horse, he does everything you want him to do as a jockey and he ticks all the boxes.

"He goes to sleep on you and he's such a good mover, that's the thing that always stands out with him. When you sit on him, there's a lot of power underneath you and he never misses a beat. I think he's a very special horse."

Churchill wins the Irish 2,000 Guineas at the Curragh in style, returning at a price of 4/9. pic.twitter.com/28qhPkHuqT

O'Brien admitted that the ground was a concern ahead of the race and now that he's won he's targeting Ascot.

"The ground was a concern, but Donnacha (O'Brien) rides him in all his work and he said it'd be no problem, so that gave us great confidence to keep going.

"Coming here we were thinking we'd go from here to Ascot and he'll probably go for the St James's Palace Stakes.

"He'd have no problem stepping up to 10 furlongs later in the year. He's so relaxed and chilled."

Popular veteran Gordon Lord Byron rolled back the years to cause a 20-1 upset in the Weatherbys Ireland Greenlands Stakes.

The Group Two lost its sheen following the defection of likely favourite Acapulco, who made such a striking return to action at this track a fortnight ago.

But the outcome was no less satisfying for connections of Gordon Lord Byron, who proved a belligerent ally from the front and never really looked like getting caught in the hands of Chris Hayes. 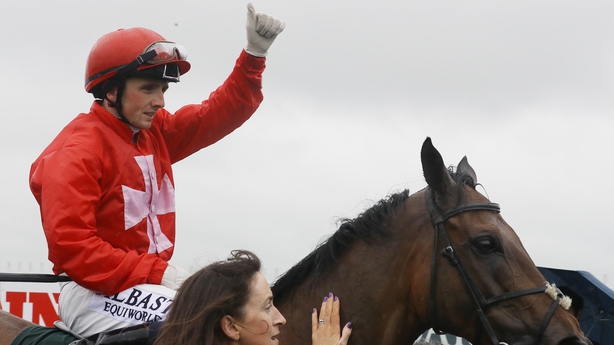 Eventual runner-up Only Mine tried hard, but the Tom Hogan-trained nine-year-old still had a length and a half up his sleeve at the line.

Hayes said: "He doesn't quicken on this ground, he lengthens on it. He won despite it (the ground).
"In fairness to Tom, he let me do my own thing."

Creggs Pipes dominated from the front in the Lanwades Stud Stakes.

Andrew Slattery's star mare was a 3-1 shot in the hands of Declan McDonogh after a fine effort to finish third in the Blue Wind Stakes at Naas a couple of weeks ago.

The five-year-old enjoyed herself in front from flag-fall and was not for catching in the testing ground, coming home three and three-quarter lengths clear of Opal Tiara.

Jessica Harrington's colt made a big impression on his debut at Leopardstown three weeks ago and was the 2-1 favourite stepped up to Listed class.

Colm O'Donoghue kept his mount wide and out of trouble and he asserted in taking fashion to score by three lengths from Would Be King.

Harrington said: "That was fantastic as I was very worried about the ground. I was very impressed with him.

"It was good to firm at Leopardstown and he skipped across it but this was the complete opposite.

"The Coventry Stakes is more than likely where he'll go if all is all right, but he has to step up again."

Rattling Jewel was a 14-1 winner of the Hanlon Concrete Handicap under apprentice jockey Killian Leonard.

Clemmie, a full-sister to Classic hero Churchill, finished an encouraging third behind Jim Bolger's Gasta on her racecourse debut in the opening race of the day, the Equisoft Irish EBF Fillies Maiden.