Caravaggio enhanced his already strong claims for the Commonwealth Cup when making an impressive seasonal debut in the EMS Copiers Lacken Stakes at Naas.

Unbeaten in four starts as a juvenile, the Aidan O'Brien-trained colt was already ante-post favourite for the Group One for three-year-olds at Royal Ascot - where he won the Coventry Stakes last year - and hardened to 6-4 from 5-2 with Betfair following this telling performance.

Ridden by Ryan Moore, the 8-15 favourite shot clear in the final furlong to win by four and three-quarter lengths from Psychedelic Funk, despite being off the track for 287 days.

O'Brien said of Caravaggio, who was sticking at sprint trips rather than try a mile in a 2000 Guineas: "He's an unbelievably quick horse. We said that we would come here and if everything went well we would go to Ascot for the Commonwealth Cup.

"I've never seen a quicker horse and that's why we went this way with him. He's showed nothing to say he wouldn't get a mile.

"We worked him seven furlongs and the petrol gauge never shifted, but I was afraid that he was so quick that it would be the wrong thing to do. It would be no bother to drop back (to five furlongs), you could go as short as you want with him. 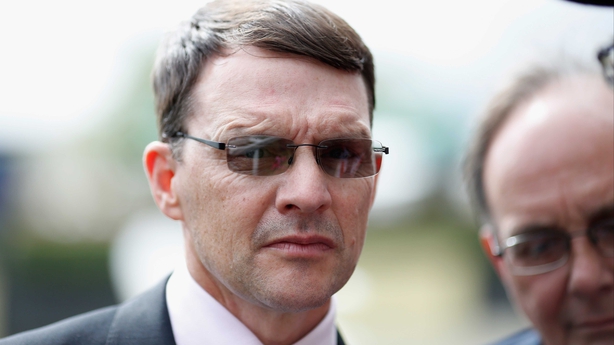 "We could train him for a mile and go back, but we didn't want to lose the brilliance. He's something to look forward to.

"He was carrying plenty and was a good bit above what he was last year. A long way above. You couldn't be happier."

The Albany Stakes at the Royal meeting is the objective for Alpha Centauri (8-11 favourite) after she turned the Coolmore Stud Irish EBF Fillies' Sprint Stakes into a procession.

Jessica Harrington's charge swept to victory by five lengths from Actress in the hands of Colm O'Donoghue to follow up her course and distance win on her debut three weeks ago.

Harrington said: "She's so relaxed and takes everything in her stride. She hardly breaks sweat.

"If she goes to Ascot it would be for the Albany. She's such an easy filly to train, and she has some stride on her."

True Blue Moon (8-1) is another in the picture for the Royal meeting after claiming the Listed spoils in the Coolmore War Command Rochestown Stakes.

The Joseph O'Brien-trained youngster came through strongly under his brother Donnacha to beat Verhoyen by half a length.

O'Brien said: "He won nicely in Dundalk, but he had a little setback after that and we were a bit worried coming here. He should improve from that as he missed a week.

"He'd have to go to Ascot after that, but which race I'm not sure. I'd be inclined to stay at five (furlongs) as he's quick and travels well.

"I'm delighted as I bred him, and it means that bit more. We still have the mare at home," said Grassick.

"We will probably look for a similar type of race again or maybe take him to England for something like a Hunt Cup. He's entered in the Ballycorus Stakes at Leopardstown next month, so that's a possibility."

Michael Halford's Allography (7-1) stuck on dourly for 3lb claimer Conor McGovern to see off Escape Clause by half a length in the Follow Us On Facebook Handicap.

Halford, who will saddle Irishcorrespondent in the Irish 2,000 Guineas at the weekend, said: "He was dropped a few pounds and we decided to claim five off him with Conor, who gave him a very good ride. He kept it simple and is good value for his claim."

He added: "Both Irishcorrespondent and Rehana (Irish 1,000 Guineas) are in good form and on target for next weekend.

"It's probably going to be a long week, but the forecast is quite good and hopefully we will get decent ground.

"Irishcorrespondent has come out of his last race at the Curragh really well and is in fantastic form."

Jim Bolger's Constant Company (8-1) got up in the shadow of the post for Kevin Manning to open her account in the Irish Stallion Farms EBF Fillies Maiden with a neck call over Betty Loch.

The Johnny Feane-trained Have A Nice Day (10-1) made light of a 149-day absence to take the Kildare Post & Kildare Now Handicap in the hands of 7lb claimer David Simmonson.