One For Arthur (14-1) became just the second Scottish-trained winner of the Randox Health Grand National as he beat Cause Of Causes for trainer Lucinda Russell and Sligo jockey Derek Fox.

Despite jumping into Blaklion at the second-last fence, the winner was spring-heeled at the final obstacle of the extended four-and-a-quarter-mile test.

Responding to everything asked of him by Fox, One For Arthur galloped on resolutely to keep Cause Of Causes at bay and clinch the world's greatest steeplechase, emulating Rubstic in 1979.

Fox, who only returned to action from injury earlier in the week, said: "It's unbelievable. I can't believe it. He just jumped so well, even though he was a long way back. He never missed a fence, within reason. He was unbelievable.

#GrandNational winner Derek Fox: "Not everyone can be champion jockey, but the Grand National is maybe a race for a lad like myself." pic.twitter.com/UoHZ6ppf0N 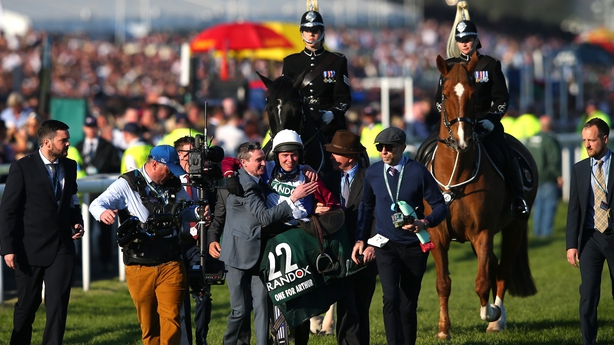 Russell, whose partner and assistant is former champion jockey Peter Scudamore, said: "What a day! We have a fantastic team behind us and I'm just so pleased.

"He's amazing. He's improved very time. I kept thinking barring accidents, he would win the National and he has!

"Together (Peter and I) we have had good and bad times but the horses are all back in form now.

"It's brilliant for Scotland. I said it's for Scotland, but it's really for the team and the yard.

One For Arthur is owned by the Two Golf Widows, aka Deborah Thomson and Belinda McClung, and they were left in disbelief after watching their horse triumph by four and a half lengths.

Thomson said: "I just can't believe it. It's been an absolutely amazing day. Arthur just cruised that race, Derek rode so well and I'm just a bit lost for words really.

"He's given us a fantastic journey."

McClung added: "I thought this morning, it's baking hot so there's no pressure now, he's not going to win on that ground but I have to say he's just shown his class today.

"He's amazing and he got a great ride."