Ante-post favourite Minella Rocco will not run in next month's Randox Health Grand National at Aintree.

The seven-year-old posted his best effort to date in finishing second to Sizing John in last week's Cheltenham Gold Cup and appeared to be favourably treated for the extended four-and-a-quarter-mile contest.

However, trainer Jonjo O'Neill has confirmed he will not line up on Merseyside, with connections taking a long-term view on the gelding's future.

O'Neill tweeted: "Minella Rocco has been taken out of the Grand National this morning. He's absolutely fine and we'll aim him at the Gold Cup again next year."

"He's only seven and he had a hard race in the Gold Cup.

"It will take him a while to get over it so we felt we'd just look to next year with him." 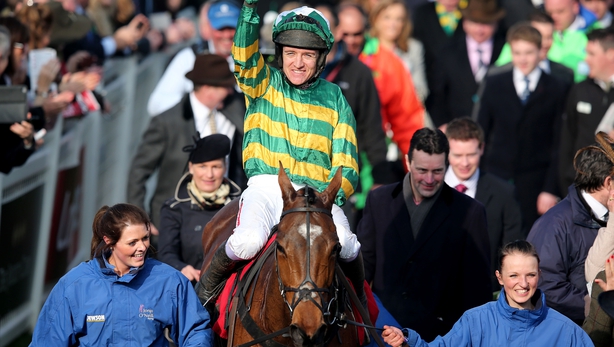 While Minella Rocco will not represent O'Neill and McManus at Aintree, former World Hurdle winner More Of That (above) will tackle the Grand National.

He finished sixth in the Gold Cup, beaten just under 10 lengths in what was his best effort since switching to fences following his 2014 Festival triumph.

O'Neil said: "More Of That came out of the Gold Cup well and will now head to Aintree for the National."

The Jackdaws Castle handler also ruled the McManus-owned Shutthefrontdoor out of Aintree, with that one heading to Fairyhouse in an attempt to repeat his 2014 Irish Grand National success.