Carter McKay will spearhead Willie Mullins' team of five from the 36 entries in the Weatherbys Champion Bumper on 15 March as the trainer looks for an incredible ninth win in the Cheltenham Festival race.

Having ridden his first winner himself in 1996 when Wither Or Witch was successful, the likes of Alexander Banquet, Florida Pearl and Champagne Fever all gained their first notable wins in the race.

Carter McKay is owned by Sheikh Fahad's Pearl Bloodstock Ltd and has scored at Leopardstown and Naas.

Nicky Henderson, who has never won the race, has entered Daphne Du Clos, Dan Skelton has given Cause Toujours the option with Irish Roe also there for the small yard of Peter Atkinson.

Western Ryder, West Coast Time and Debuchet are others in the mix. 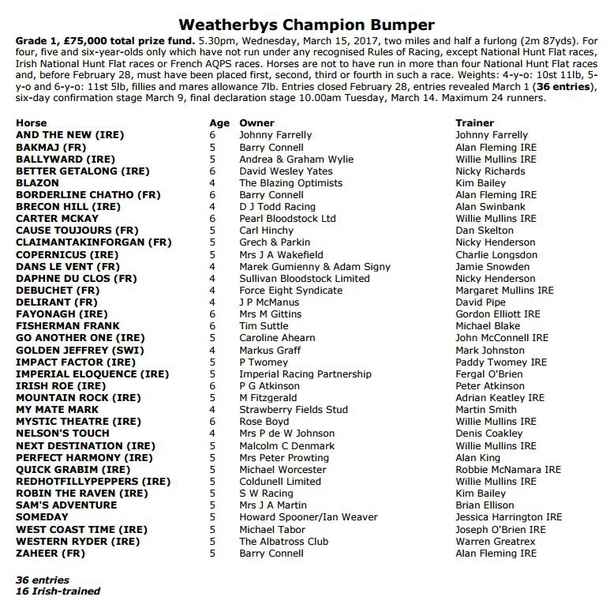 Enda Bolger, who has taken the unique contest five times, has five entries, headed by Cantlow, who scored at the course in December.

Cantlow was second over the course on Festival Trials Day in January, when the shock 50-1 winner was French challenger Urgent De Gregaine.

Urgent De Gregaine is rated only "50-50" to run by trainer Emmanuel Clayeux, while there are three other potential French runners.

This is the second year that the Glenfarclas Cross Country Chase is run as a conditions event, having been a handicap between 2005 and 2015. 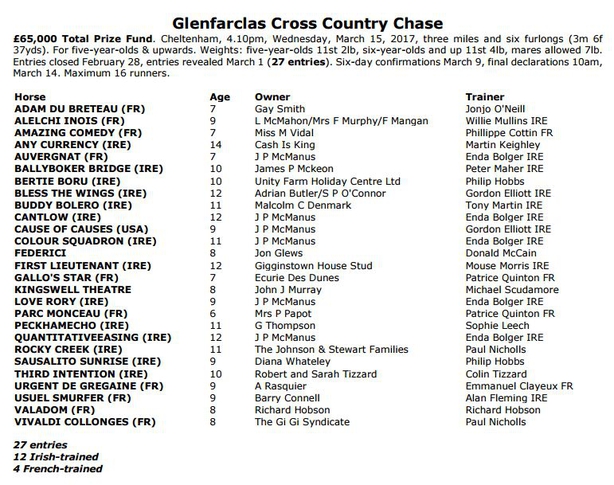 Willie Mullins landed the first running of the £80,000 G2 Trull House Stud Mares' Novices' Hurdle in 2016 and accounts for eight of the 31 entries for this year's renewal on 15 March.

The Mullins-trained octet includes current market leader Airlie Beach, who is unbeaten in seven starts, with her last win coming in the Grade One Royal Bond Novice Hurdle at Fairyhouse in December.

Mullins' entries also include Let's Dance, who is unbeaten in four starts this season, while the leading British-trained hopes include Warren Greatrex's La Bague Au Roi. 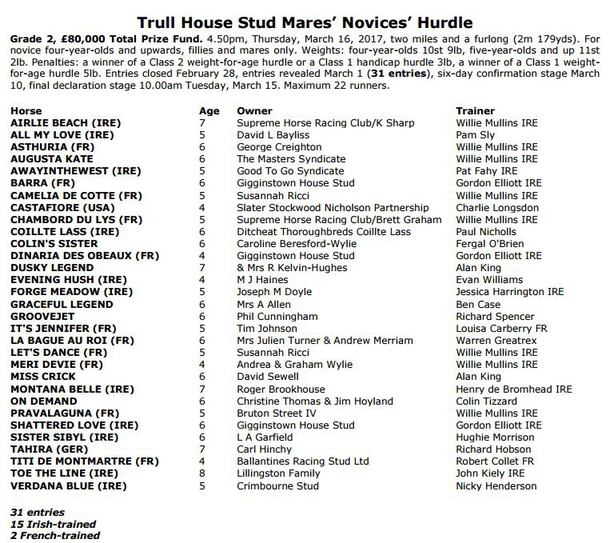 On The Fringe could attempt to become the first triple winner of the £45,000 St James's Place Foxhunter Chase on St Patrick's Day.

The J P McManus-owned 12-year-old is among 39 entries for the race, where the leading British-trained contender could prove to be Jack Barber's Ask The Weatherman, an outstanding point-to-pointer who made the perfect start to hunter chasing when scoring at Wincanton at the beginnin og Febraury. 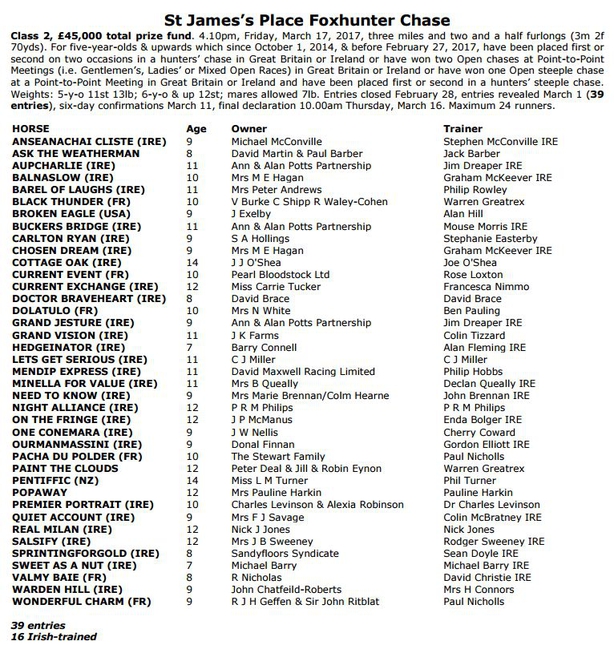