Willie Mullins expects Ruby Walsh to side with Melon in the Supreme Novices' Hurdle at Cheltenham.

Melon was the subject of plenty of positive reports even before his impressive Leopardstown debut in late January and he spearheads a potential four-horse assault on this year's Supreme by Ireland's perennial champion trainer.

"When you're looking at what Melon does at home all the time, I'd say it will be an easy enough decision for Ruby"

"When you're looking at what Melon does at home all the time, I'd say it will be an easy enough decision for Ruby.

"I think both Crack Mome and Cilaos Emery have good enough form to be placed in it, if not win it, if things go right for them.

"All of them will improve."

Mullins looks set to be strong-armed in each of the novice hurdles at the Festival.

Deloitte winner Bacardys is set to spearhead the squad bound for the Neptune Investment Management Novices' Hurdle, while Augusta Kate is set for a rematch with Death Duty in the Albert Bartlett, having fallen at the final flight when the pair clashed at Naas in early January.

Mullins said: "Bacardys probably did surprise me in the Deloitte, but I was happy with the way he did it with the tactics we used. He'll probably go for the Neptune, rather than the Albert Bartlett.

"He's a horse we did think a lot of and the Deloitte put him back on track.

"Saturnas could go there as well, as could Kemboy. Saturnas pulled a muscle, hopefully he'll be all right in a few days. 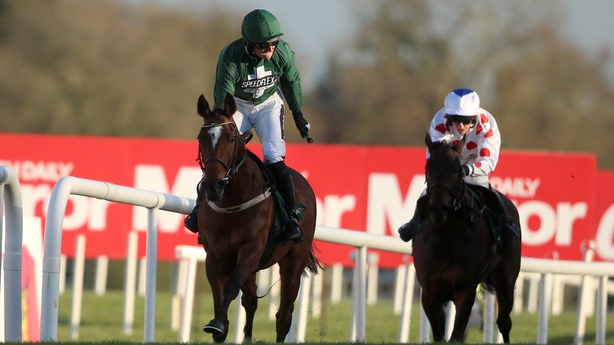 "Augusta Kate (above) looks like she'd want a longer trip, so I'd say she could go Albert Bartlett. She was upsides Death Duty when she fell, so she could easily run there.

"C'est Jersey goes for the Albert Bartlett, as does Penhill. I think coming out to three miles on better ground will help him (Penhill). He's schooling well at home and he has the ability.

"I think Bon Papa is good enough to travel. We'll see what connections want to do. He could go for the Albert Bartlett."

Invitation Only, not seen since disappointing behind Death Duty at Navan in December, is entered in both of the longer novice hurdles, but may not be part of the travelling party.

"He had a little bit of a setback. I seemed to be getting him back and then I wasn't happy again, but I've been much happier with him the last few days," Mullins added.

"Whether I have enough done to go to Cheltenham with him is the thing and if I'm not happy with him I'll probably just keep him for an easier task at home." 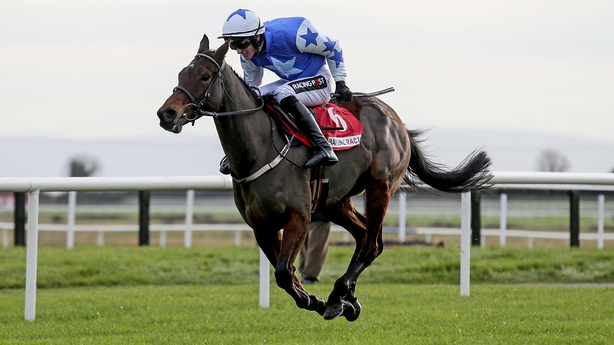 The unbeaten Airlie Beach (above) has long had the Trull House Stud Mares' Novices' Hurdle earmarked as her likely target and she looks set to be taken on by stablemate Let's Dance.

Mullins said: "The obvious one for Let's Dance would be the mares' novice.

"We seem to have a few a few nice ones for that, but she's a second-season novice, which is a big help to her.

"She could slot in any of the novice races, but I'd say that would look the easiest one.

"Mares' form seems to be good this year. I think the mares' form is stacking up better than the geldings' form.

"Airlie Beach probably has to take her on. It's going to be a tough race, but she's in good form.

"If Let's Dance goes there it's going to make it tough."

With Yorkhill a confirmed runner in the JLT Novices' Chase, Mullins is set to rely upon Royal Caviar in the Arkle Trophy.

Bellshill and Haymount, meanwhile, are under consideration for both the RSA Chase and the four-mile National Hunt Chase.

One of the champion trainer's most interesting handicap entries is Arctic Fire.

The eight-year-old, who has not been seen since chasing home stablemate Faugheen in last year's Irish Champion Hurdle, is in the County Hurdle, but is far from certain to line up.

"Arctic Fire is in good order and has worked well. I stuck him in the County Hurdle just to see, but it's probably less than 50-50 whether he runs or not," Mullins added.