Ante-post favourite Bellshill tops the list of seven entries made by Willie Mullins for the RSA Chase at the Cheltenham Festival on March 15.

The Graham Wylie-owned seven-year-old, who is the general 4-1 favourite for the three-mile Grade One contest, features among 55 entries received for the race.

Nineteen horses from other yards in Ireland have also been entered, including the Eddie Harty-trained Coney Island.

But one notable omission is the Jessica Harrington-trained Our Duke, who had been as short as 8-1 for the race.

The British contingent is headed by the Nicky Henderson-trained Might Bite, a final-fence faller in a Grade One at Kempton on Boxing Day, and Aux Ptits Soins, from the yard of Paul Nicholls. 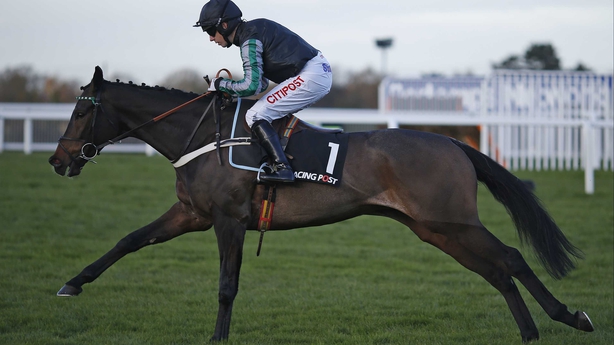 Altior and Min remain on course for a second showdown at the festival in the Racing Post Arkle Novices' Chase on March 14.

Having respectively filled the first two positions in last year's Supreme Novices' Hurdle, the star duo, who are both unbeaten over fences, feature among 33 entries for the two-mile Grade One.

Altior is one of three entries for trainer Nicky Henderson, alongside Buveur D'Air and Top Notch, while Min is one of eight potential runners for Willie Mullins, who has won the Arkle for the last two years.

Champion trainer Paul Nicholls has entered Politologue and Le Prezien, winner of a Grade Two at the track in November, as he seeks a third Arkle triumph - and a first since 2003.

There are 26 entries from Ireland for the inaugural JT McNamara National Hunt Chase, named in the memory of the former leading Irish amateur rider who died in July.

The four-mile race has attracted 71 entries in all for 14 March date at the festival.