Ruby Walsh admits "tougher test lie ahead" for Min but was adamant he could not have been any more impressive at Leopardstown over Christmas.

Runner-up in the Supreme Novices' Hurdle in March, he is two from two over fences, having already registered a Grade One win in the Racing Post Novice Chase on December 26.

However, the horse who beat him at Cheltenham, Nicky Henderson's Altior, is also being aimed at the Arkle Trophy at the Festival in March.

"Min has done everything we hoped he might do," Walsh told Racing UK.

"He's jumped really well in his two starts at Navan and Leopardstown. He settled a bit better than he did over hurdles.

"He just does everything so effortlessly" - Ruby Walsh on Douvan

"He was entitled to win at Navan, and I suppose with Identity Thief pulling up at Leopardstown that took away from that performance.

"But he can only do what he did. He galloped really strongly. Altior was too good for him in the Supreme last year so tougher tests lie ahead."

Last year's Arkle winner Douvan was also a Grade One scorer at Leopardstown and looks to have no peers in the two-mile division.

"Douvan was very good at Leopardstown. It was only a fortnight since he'd won at Cork but he jumped super and travelled really well," said Walsh.

"He just does everything so effortlessly.

"It was a really solid performance, but he didn't do anything he wasn't entitled to do."

Meri Devie was a new name to Irish racegoers but the Graham Wylie-owned filly was five lengths too good for St Leger third Housesofparliament in a maiden hurdle at Leopardstown on December 27. 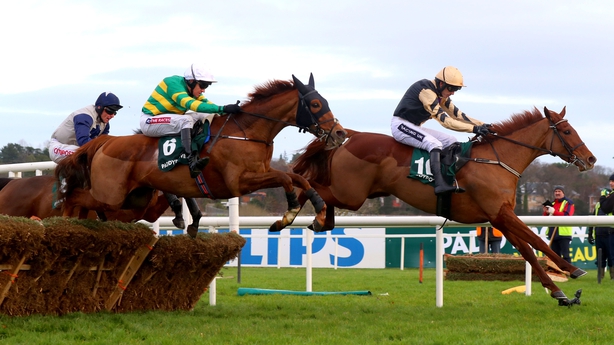 "She's been working very well at home but had very little experience, jumping-wise, having come from off the Flat in France," said Walsh.

"She had been running to a pretty high standard. She did contest a Group One in Deauville, but she'd been working well, has a great attitude and jumped super.

"She beat Housesofparliament pretty much fair and square on the day.

"It was a good performance. Hopefully she can build on it but she couldn't have done any more on the day."

One of very few Christmas disappointments for Walsh and Willie Mullins was Nichols Canyon, who was second to Petit Mouchoir in the Ryanair Hurdle.

"I don't think he ran his race," added Walsh.

"I don't want to take anything away from Petit Mouchoir, who was a very good winner on the day, but Nichols Canyon barely managed to beat Ivanovich Gorbatov and Jer's Girl and they were a long way behind him at Punchestown.

"I don't think it was a true run. He jumped a bit right and Petit Mouchoir had him at the pin of his collar every step of the way.

"It was a tame effort from him as he's usually such a tough horse."