Aidan O’Brien’s dominance on the racetrack in 2016 was recognised on the awards circuit on Tuesday night as the Ballydoyle maestro saw four of his leading lights scoop prizes at the 26th annual Cartier Racing Awards at the Dorchester Hotel in London.

Minding was named Horse of the Year. The three-year-old Galileo filly was a five-time Group One winner in 2016 at distances ranging from a mile to a mile and a half.

Her rivals in the Cartier Horse of the Year category were Almanzor, Found, Postponed and Highland Reel.

Minding also claimed top honours in the Cartier Three-Year-Old Filly category, ahead of Alice Springs, Quiet Reflection and La Cressonniere, on a night dominated by O'Brien and owners Coolmore.

Minding's stablemate Found, who led home a remarkable 1-2-3 for O'Brien and Coolmore in the Prix de l'Arc de Triomphe, was named Cartier Older Horse of the Year, ahead of Postponed, Limato and Highland Reel. 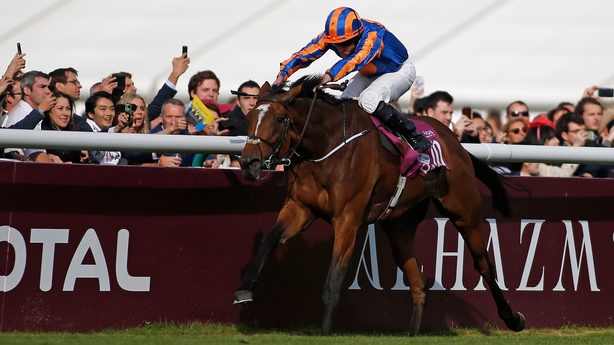 Ascot Gold Cup hero Order Of St George landed the Cartier Stayer Award for the Ballydoyle-Coolmore axis, with Quest For More, Vazirabad and Sheikzayedroad also in contention for the prize.

The fifth award in a stellar year for O'Brien and Coolmore went to Churchill, who was named Cartier Two-Year-Old Colt of the Year. The other nominees in this category were Caravaggio, The Last Lion and Mehmas.

French ace Almanzor, the Irish and English Champion Stakes winner, scooped the award for Cartier Three-Year-Old Colt, ahead of Galileo Gold, Harzand and The Gurkha.

Quiet Reflection became the first three-year-old filly to win the Cartier Sprinter Award, with Limato, Mecca's Angel and The Tin Man also in the hat for the prize.

Lady Aurelia was named Cartier Two-Year-Old Filly of the Year, which was down largely to her breathtaking Royal Ascot success in the Queen Mary Stakes. Rhododendron, Brave Anna and Roly Poly were the other contenders.

The Cartier/Daily Telegraph Award of Merit went to O'Brien, who has enjoyed a truly stunning year. The 47-year-old has sent out 22 Group/Grade One winners in 2016, just three short of the record number of top-tier winners saddled in a single season, a feat accomplished by the late Bobby Frankel in 2003.