Aidan O'Brien looked to have a strong chance of clinching his first victory in the Grade One contest, with Cheveley Park Stakes second Roly Poly joined by Hydrangea, runner-up to stable companion Rhododendron in last month's Fillies' Mile at Newmarket.

Adding further strength to the raiding party was the Joseph O'Brien-trained Intricately, a surprise winner of the Moyglare Stud Stakes at the Curragh and the mount of the trainer's brother, Donnacha.

Of the trio, Intricately was the first in trouble, with 18-year-old O'Brien having to get low in the saddle from an early stage as Lull set a furious gallop.

Both Roly Poly under Ryan Moore and the Seamie Heffernan-ridden Hydrangea raced close to the pace, but faded out of contention in the straight.

Lull ran a remarkable race from the front before eventually giving way and finishing fourth.

Brown said: "She's a work in progress and continues to get better. She's equally as good in the morning on dirt, so she may be one we try on dirt down the road, but thankfully we made the right choice today to run her on the grass."

Aidan O'Brien felt the long season had caught up with his two runners.

"With Roly Poly, she's probably done plenty for this season. She had a good early position, but showed me that she needs a bit of a break now," said the Ballydoyle handler.

"It was a similar story with Hydrangea, who has had a busy year, and again, needs a bit of time after this.

"They are two fillies that haven't won a Group One and we let them come here to give them their chance to win one of those."

Joseph O'Brien said of Intricately: "As I feared, the track was much too sharp for her. It was a little worry that we had beforehand and the first bend in particular was very tight.

"It's been a great experience coming out here and we will give this filly a good break now."

Beholder, expertly ridden by Gary Stevens, inflicted the first ever defeat on Songbird in a thrilling photo finish to win the $2m Breeders' Cup Distaff by a nose.

Songbird, previously unbeaten in 11 lifetime starts, had led the 1 1/8 mile race almost the entire way but was pipped at the post after a breathtaking charge home by Beholder, who won the same event in 2013 as a 3-year-old filly.

Forever Unbridled, with Joel Rosario on board, finished a length and a quarter behind in third.

The Distaff, which highlighted the opening day's four-race card at the Breeders' Cup, was previously known as the Ladies' Classic. 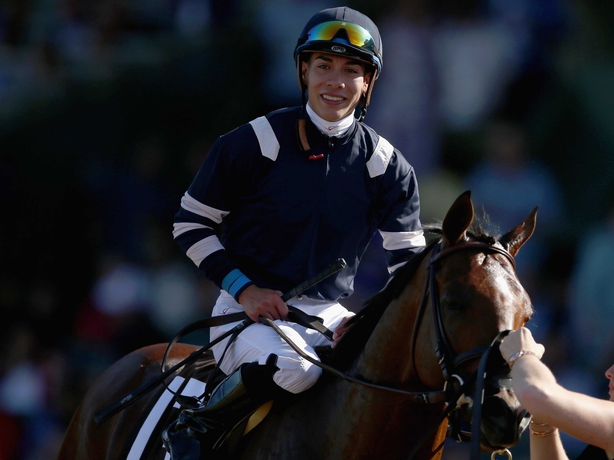 Lancaster Bomber fared best of the raiding party in second place as Oscar Performance [above] ran out a dominant winner of the Juvenile Turf.

Aidan O'Brien had saddled three of the last five winners of the Grade One contest and was double-handed in this year's renewal, with Ryan Moore partnering Intelligence Cross and Seamie Heffernan doing the steering on Lancaster Bomber.

Heffernan settled his mount in midfield, while Moore appeared intent on playing his cards late aboard Intelligence Cross.

However, Oscar Performance raced close to the pace throughout under Jose Ortiz and after taking the lead early in the straight, picked up well to score with plenty in hand. 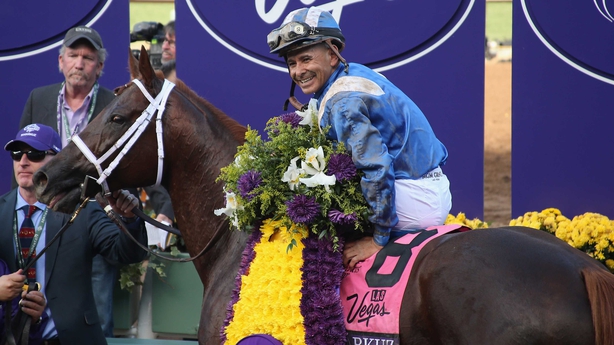 Mike Smith produced Tamarkuz [above] with a well-timed challenge to claim an authoritative success in the Dirt Mile.

Runhappy took the field along for much of the journey, but began to falter before the home turn, leaving hot favourite Dortmund and the consistent Gun Runner to dispute the lead at the top of the straight.

However, all the while Smith was biding his time aboard the Kiaran McLaughlin-trained Tamarkuz and after hitting the front in the final furlong, he powered clear to win by a big margin.

Gun Runner was second, with Accelerate coming home well to beat Dortmund to third place.
It was a 23rd Breeders' Cup winner for Smith.