Aidan O'Brien will once again be crowned champion trainer as the 2016 Irish Flat season draws to a close at Leopardstown on Saturday.

The fillies Minding and Found were his big prize-money winners during another tremendous season for Ballydoyle, the latter leading home a fabulous one-two-three for the stable in the Prix de l'Arc de Triomphe.

Minding's Pretty Polly Stakes win at the Curragh was one of five domestic Group Ones for O'Brien, who saddled Seventh Heaven to land the Darley Irish Oaks, plus two-year-old stars Churchill in the National Stakes and Caravaggio in the Phoenix Stakes.

His other domestic Group One triumph was Alice Springs in the Matron Stakes on Longines Irish Champions Weekend.

O'Brien said: "We've been lucky the horses have run well through the year and we've been very lucky to have some very good horses.

"There's been so many big days, but it's very hard to get away from the Arc [Found].

"There's a big team of horses for next year, the likes of Churchill, Caravaggio and Rhododendron, they're all horses to look forward to."

"It was a massive day, the filly was great and the other two [Highland Reel and Order Of St George] ran great races. It was a very special day.

"There's a big team of horses for next year, the likes of Churchill, Caravaggio and Rhododendron, they're all horses to look forward to."

Pat Smullen was first crowned champion jockey in 2000 and heads the list for the ninth time this year.

His finest hour undoubtedly came aboard Harzand as he completed the Epsom-Curragh Derby double in the Dubai Duty Free-sponsored Classic at the Curragh.

Smullen [below] also enjoyed notable success with Fascinating Rock, Shamreen and Zhukova, all for his boss Dermot Weld, and said: "This season has gone very well from start to finish, but I think it's all down to riding for a great stable. 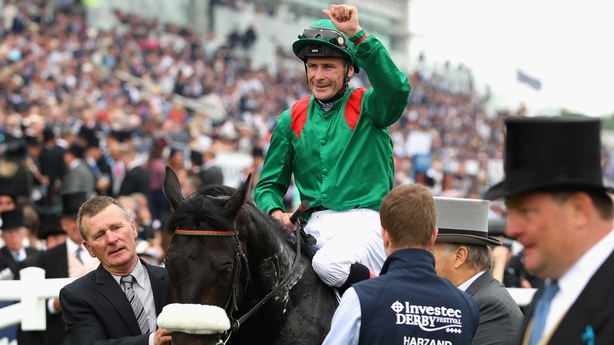 "When you've got backing like that behind you and you see the colours that are hanging on your peg every day, it makes you very appreciative of what you've got.

"It's probably been my best ever season. To win the Epsom Derby was a huge thing and then to follow up at the Curragh was great.

"To be champion is always a goal I set myself and thankfully we've achieved that.

"I'll take some time off and hopefully go to Hong Kong and have a few trips abroad.

"I'll pretty much have all of Christmas off and into the New Year, get refreshed and ready to go again."

O'Brien's son, Donnacha, was crowned champion apprentice at the age of 18 in just his third season riding, finishing clear of Gary Halpin, Killian Leonard and his sister, Ana, in the table.

His stand-out moment was undoubtedly his first Group One success which came at the Curragh where he won the Moyglare Stud Stakes on Intricately, trained by his brother, Joseph.

For good measure, the filly was bred by their mother, Annemarie. Donnacha also won a Listed race and a Group Three race on Order Of St George during the season.

He said: "It was always the aim to get as close to it [apprentice title] as possible. I think this year has exceeded expectations.

"Realistically I've been riding the best horses, but I've been working as hard as I can to improve my riding and making sure I'm at a place where I'm not a disadvantage to have on them.

"I very rarely ride under 9st. Next season 9st will probably be my mark and I won't kill myself to get underneath that.

"Winning the Moyglare was the highlight. We thought she had an each-way chance, but it was a pleasant surprise and it was a fantastic day, especially with mum breeding her and Joseph training her."

O'Brien senior added: "It's great for Donnacha. He's a big fellow and it's tough going - you have to work hard day in day out - we're delighted for him."