Almanzor confirmed his reputation as the best colt of the Classic generation with another stunning display in the Qipco Champion Stakes at Ascot.

Trained by the champion trainer of France, Jean-Claude Rouget, he followed up his Irish Champion Stakes win by beating Found once again.

Given Aidan O'Brien's mare won the Prix de l'Arc de Triomphe in between her races against Almanzor, it shows just how good the Wootton Bassett colt is.

From his draw in stall one Christophe Soumillon was at pains to make sure he was not trapped in against the rails and while he ended up in a pocket at one stage, Almanzor was good enough that it made no difference.

The Grey Gatsby returned to form and hit the front, taking over from Racing History with two furlongs to run, but Soumillon looked cool.

Ryan Moore moved Found up on his outside but Almanzor, the 11-8 favourite, showed a blistering turn of foot once more to win by two lengths.

Jack Hobbs ran a tremendous race on his comeback, staying on for third.

Soumillon said: "He is an amazing horse. Everything you do with him looks easy, it just shows you how good he is.

"I never thought at the beginning of the season he would be that strong the whole year. He is getting smarter and smarter.

"A few horses were going left and right in the beginning, I was trying to get a good position but unfortunately I had to go on the inside. When I came on the outside with The Grey Gatsby I knew he was going to give me something.

"I came a bit early for him and I knew Found was there and how strong she is, so I was giving him a chance to finish well and the last 100 yards he kept going.

"We have never tried a mile and a half but I am sure he will stay." 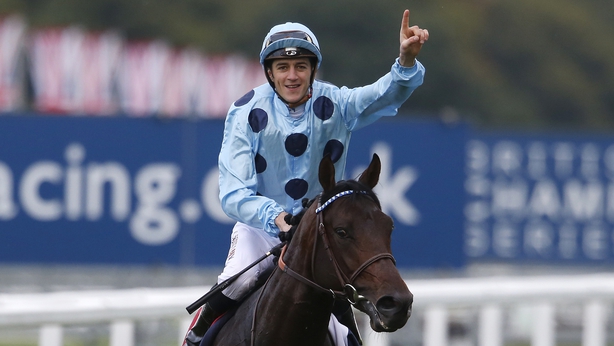 Almanzor is due to stay in training next season which gives everyone something to look forward to.

It has been an incredible season for Rouget, who has cleaned up in his homeland but was dealt a blow when his French Guineas and Oaks winner La Cressonniere was ruled out of the Arc.

It was suggested by some that Almanzor would be rerouted from Ascot to Chantilly to replace her but Rouget stuck to his original plan and was repaid in kind, and those present at Ascot were glad he did.

Rouget said: "He's a champion, he did the same performance as in Leopardstown. He had the time, five weeks between the two races, which was perfect.

"He beat Found a little further today because I think she felt the Arc in her legs, just 13 days ago, but still she's a champion, too. With him, Found, Minding - it really is Champions Day.

"I wanted to keep him at this distance, we keep him next year and we'll see if he goes to the Arc then. He'll have a good rest in the winter and we'll see where we go in the spring.

"He was quite backward at two, he didn't show he was a Group horse but he improved from race to race, with each race he got better.

"He wasn't better today than five weeks ago, he was just doing his job."

O'Brien said of Found: "I'm delighted for her, she only ran in the Arc two weeks ago.

"She's a great mare and she still kept coming with her head down.

"Ryan gave her a great ride as she was drawn out wide which is a difficult enough place.

"She looked great and was well in herself. I'm not sure about the Breeders' Cup, the lads will have to talk about that.

"Highland Reel will be going for the Turf so I'm not sure if she will go. The climate is different from last year as it will be very fast ground."