Johnny Murtagh hailed Aidan O'Brien as a "genius" after Ireland's champion trainer monopolised a Group One race for the third time in a week.

Murtagh, the former Irish champion jockey and now a successful trainer, saluted the achievements over the past week, but was not surprised as O'Brien has been such a king of the sport for years.

From 2008 to 2010, Murtagh was retained by Coolmore as O'Brien's stable jockey and because of that was able to chalk up 19 Group One winners in that first season and 10 the following year.

The Ballydoyle maestro has, however, lifted the bar even higher this month after dominating the sport, not just in Ireland, but in England and France in particular.

Instead of basking in the unprecedented achievement of saddling the first three home in the Prix de l'Arc de Triomphe, courtesy of Found, Highland Reel and Order Of St George, O'Brien mopped up the two major prizes for two-year-olds at Newmarket.

Earlier in the year he had the first three home in the Qipco 1000 Guineas with Minding, Ballydoyle and Alice Springs at the headquarters of British Flat racing. 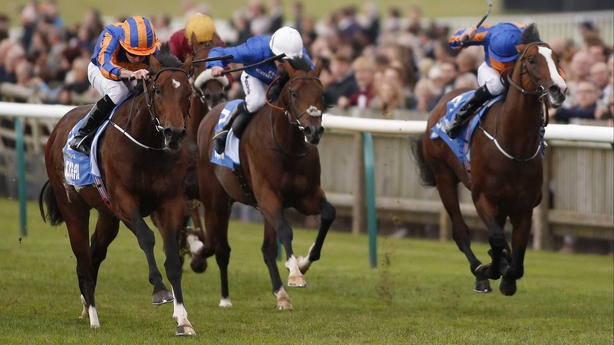 Only O'Brien could back up a one-two with Rhododendron and Hydrangea in the Dubai Fillies' Mile on Friday by repeating the trick with Churchill and Lancaster Bomber in the Dubai Dewhurst Stakes on Saturday to give him a 20th Flat success at the top level this year.

"It's not just yesterday or today or this year, he's been doing it for a long time," said Murtagh.

"He's just a genius at what he does and I suppose all those Galileos is a huge help."