Eziyra stayed on strongly to be an appropriate winner of the C L & M F Weld Park Stakes at the Curragh and head into winter quarters as a potential Classic candidate.

Trained by Dermot Weld, in whose late parents' memory the Group Three race is run, the Aga Khan-owned filly kept with the bulk of the field who moved over to the near side and led about a furlong out under Pat Smullen.

Godolphin's Grecian Light, trained by Charlie Appleby, was the only rival to threaten in the closing stages but she was kept at bay as the 5-4 favourite scored by two lengths. Legitimus was four and a quarter lengths away in third spot.

Weld, who was winning this race for the first time since 1999, said: "She's been very consistent and that was an excellent performance. That's it for this year.

"I hope she will develop into an Irish 1,000 Guineas filly next year. We put the hood on to help her to settle as she was a bit keen the last day. I see her as a miler next year.

"Pat maintains she wants good ground as she is not the strongest of fillies physically, and she has a beautiful action."

Smullen said: "Her form was good coming into the race, she was entitled to be favourite. No question she was in better humour today than the last day (second to Sea Of Grace in the Flame Of Tara Stakes), so the hood helped."

RaceBets clipped the winner to 18-1 from 20-1 for the Investec Oaks.

The Happy Prince recorded his first Pattern-race success when running out a smooth winner of the Renaissance Stakes at the Curragh.

The four-year-old had shown he was capable of winning at a high level when only beaten a short head in the Group Two Park Stakes at Doncaster recently.

The 11-4 favourite put that experience to good use in this Group Three over six furlongs as he defeated Flight Risk by three-quarters of a length in the testing conditions under Ryan Moore.

The Henry Candy-trained La Rioja ran a creditable race and was just a nose away in third.

Winning trainer Aidan O'Brien said: "He's definitely improving. Ryan said he would have no problem going back to five furlongs as he has plenty of speed.

"He's more straightforward and is really enjoying it now."

O'Brien doubled up when Capri landed the odds to take the feature Beresford Stakes.

When he asked Theos Well for an effort, the response was good and he soon put the race to bed, coming home three and a quarter lengths clear of Pivot Bridge with Bibliotheca a head away third and Henry's Girl fourth.

It was another 'Derby' success for Mullins, who has twice been victorious in the Epsom version of this race.

He said: "It's great to ride over the Derby tracks, like here and Epsom, over the mile and a half. I always want to try and get a ride in these races. Dad (Willie Mullins) won it last year (with Noble Inn), but I couldn't make the weight and Katie (Walsh) rode him.

"Mick said when he went past horses he'd love it. I think a strong gallop and a trip is what he wants and probably slow ground. He'd have a chance in the Cesarewitch.

Tithonus (12-1) won for the fourth time in two months when landing a ready victory in the Mongey Communications Joe McGrath Premier Handicap.

Successful at Galway, Cork and Dundalk at distances from five to seven furlongs, the Denis Hogan-trained five-year-old again demonstrated his versatility with a strong performance over the minimum trip.

Tylery Wonder tacked across from the far side to the stands side to lead the field and still held every chance a furlong out but 3lb claimer Gary Halpin brought Tithonus to go on and stamp his authority on the race.

Rattling Jewel was second, three-quarters of a length behind the winner, with Primo Uomo third and Tylery Wonder fourth. 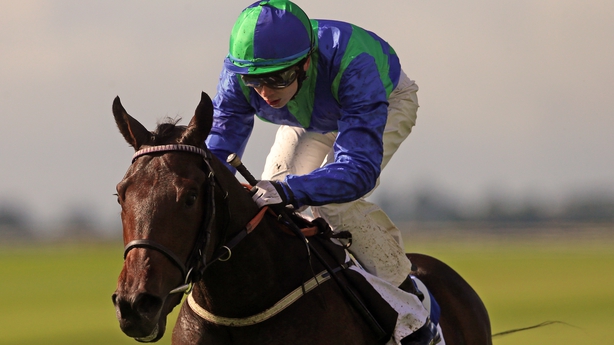 In the opener Vociferous Marina, the longer price of Jim Bolger's two runners, stepped up on her debut a week ago, to open her account in the Irish Stallion Farms EBF Maiden at the Curragh.

The daughter of Vocalised came with a strong run under Ronan Whelan towards the outside to settle the issue in a matter of strides.

Vociferous Marina (14-1) got first run on Finn McCool, who stayed on well for second place, but was a length and a three-quarters behind the comfortable winner at the line.

The first two pulled nine lengths clear of newcomer Low Latency in third. Bolger's other contender Treaty Of Vienna was fourth after being prominent for most of the contest.

Bolger said: "She ran well at Gowran and obviously stepped up from that.

"She goes on the ground which helps, and I'd say she will get a mile. She could run again this year."