Eziyra (2-5 favourite) was an authoritative winner of the Colm Quinn BMW E.B.F. Fillies Maiden for Dermot Weld and Pat Smullen, taking it up on the turn and forging a couple of lengths clear of Hydrangea to look a smart prospect in the making.

Weld said of the Aga Khan-owned winner: "Pat said she is a big, immature filly and still has a lot to learn. She broke a bit slow but has a lot of natural talent.

"She will handle very fast ground, and the ground today was as slow as she'd like. She is bred to stay well as there is plenty of stamina on her dam side.

"She will go for a Group race next, and I'd not be afraid of a mile."

Galway kings Weld and Smullen were swiftly back in the winner's enclosure as the Aga Khan's Sikandarabad (10-11 favourite) was a no-nonsense winner of the Caulfield Industrial E.B.F. Maiden.

Weld said: "He can go forward from here on. The second horse was rated 93 so we are probably looking at a Listed race or a Premier Handicap."

Connor King took a nasty-looking fall from Sea Captain early on in the race and was taken to hospital for checks, although he was reportedly moving all his limbs.

Our tribute to the late great JT McNamara. RIP https://t.co/IdfZKqhmIA

A minute's silence was observed in memory of the late JT McNamara before the second event on the card, the Latin Quarter Beginners Chase.

A large group of former weighing-room colleagues were in attendance in the parade ring, and the silence was followed by a spontaneous round of applause by racegoers for the former top amateur rider.

It went the way of 66-1 chance Talk The Lingo, who banished his recent form to run a brave race in front and hang on in determined fashion.

Willie Mullins' Briar Hill was the 6-4 favourite on his fencing debut but while he finished very strongly in the hands of Ruby Walsh, the all-out Talk The Lingo and Barry Cash just found the line coming in time, with a head separating them.

Winning trainer Joe Hennessy said: "He's improved a lot from his last run, although he wasn't doing a tap in front and Barry was riding him from fence to fence.

"The family must like it around here as he's a half-brother to Bob Lingo (2012 Galway Plate winner). He might come back here for the Plate next year!

"He's the only horse I have in training at the moment."

The Mullins-trained Penhill earlier came from way off the pace to take the Colm Quinn BMW Novice Hurdle, beating stablemate Master Of Verse.

The 8-1 winner looked to have run his race under Walsh but found another gear from somewhere to arrive on the scene after the last, where confidently-ridden favourite Oathkeeper had been less than fluent, not doing his chance any good.

With Penhill on the inner, Bryan Cooper pressed on the outside on Master Of Verse but ultimately the former prevailed by half a length, bouncing back from a recent odds-on reverse at Killarney.

Mullins said: "It was a masterclass in schooling and riding. He didn't jump the first two or three, and Ruby said he'd concentrate on getting him jumping after that.

"I stopped watching him as I thought he'd no chance and was looking at Master Of Verse, who was given a fine ride by Bryan to challenge at the last. I couldn't believe it when I saw Ruby coming up on the rail.

"It was a spectacular ride as he didn't enjoy the hurdles."

McDonogh, meanwhile, made it a swift double of his own when storming home on the Ado McGuinness-trained Beau Satchel (11-4 favourite) in the Caulfield Industrial Handicap immediately after his heroics on Creggs Pipes. 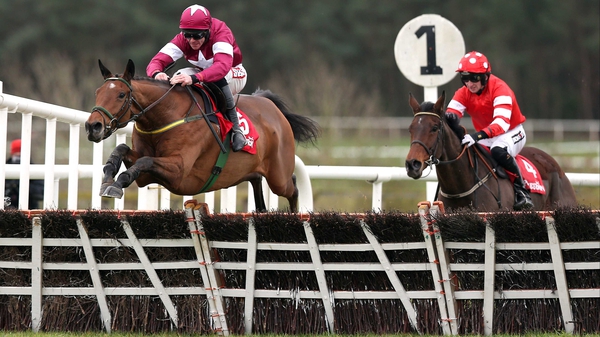