Quiet Reflection struck a blow for the north, and the little guy, to give former jump jockey Dougie Costello his first Group One win in the Commonwealth Cup at Royal Ascot.

Strongly fancied for this race since winning the Sandy Lane Stakes impressively at Haydock, the 7-4 favourite delivered on her promise.

Trainer Karl Burke, winning his first domestic race at the top level, had spoken of her in glowing terms since then and she took her record to six wins from seven starts.

The closing stages were agonising viewing for her connections as the leader, Kachy, veered badly to his left while Ryan Moore was starting his charge down the centre of the track on Washington DC.

Costello did not panic, though, and kept Quiet Reflection straight and true as she once again displayed her electric turn of foot.

Last year's inaugural running of the race produced champion sprinter Muhaarar so the sky is certainly the limit for the Showcasing filly.

She crossed the line a length ahead of Kachy, who might have been held on had he kept a true line, with another half a length to Washington DC.

Costello, who rode Countrywide Flame to win the Triumph Hurdle at the 2012 Cheltenham Festival, said: "I owe Karl Burke a lot and I'm so lucky.

"Anybody would have won on her today, and the last day.

"They went a nice gallop, but she's such an honest mare.

"She jumps, wherever you want to go she goes and she switches off.

"She's picked up on the ground and her courage and class has taken her through." 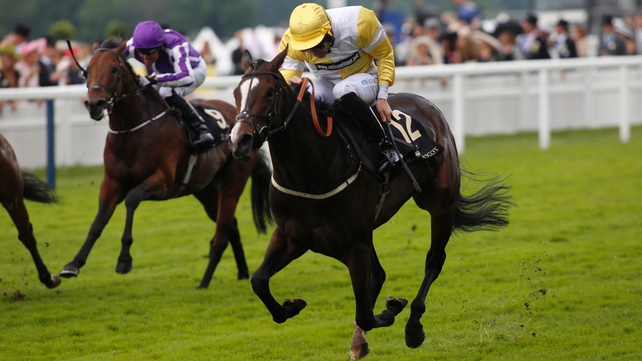 Successful owning syndicate OnToAWinner was established in 2011 by Simon Bridge and Niall O'Brien.

Bridge said: "Wow - incredible. What can you say?

"This filly has been pretty impressive from day one.

O'Brien said: "I haven't slept for a week thinking it could happen. You don't really allow yourself to believe it can.

"To come to Royal Ascot with a syndicate horse, taking on the best owners, is absolutely phenomenal.

"We've had our day now and we'll cherish it forever."

"It's a big relief as well. When you see your contemporaries and lads you grew up with like Richard Fahey and Kevin Ryan having winners at the big meetings, you're itching to have one. We've had a few near misses and it's great to get there.

"She's a very good filly. It wasn't the plan to be stuck in the middle like that and I was just praying it wasn't going to be a rough race, but she's got a good turn of foot and it's got her out of trouble.

"The Commonwealth Cup is a great race and a great idea for three-year-olds. Where would we be going if it wasn't for this?

"This was the main plan and now we've got to take on our elders.

"We're in the July Cup, I'd be a bit frightened of that if it came up fast ground with the undulations at Newmarket.

"Maybe the clever thing to do now is give her a little break and aim her at the Sprint Cup at Haydock in September followed by Champions Day back here."

Burke has had some rocky moments in his career, being banned for a year by the British Horseracing Authority in 2009 after admitting supplying inside information to gambler Miles Rodgers, but added: "I can't have any complaints. I've had a great career, I enjoyed my riding - I wasn't great at that, but did my best - and I've enjoyed training.

"We had a few problems a few years ago, but that's in the past. I know what happened - I broke a rule and got punished for it.

"I think we've done well to get back to where we are so quickly."

"I don't know why the horse drifted across the track.

"I think Richard (Kingscote) did the right thing and took him away from the other horses. I thought we were the winner all the way. I don't want to take anything away from the winner. She's beaten us.

"He's ended up on the stands side rail. A pair of blinkers might be the answer."

Aidan O'Brien said of Washington DC: "He ran very well. It was a creditable effort, but he'd prefer better ground."