Caravaggio moved to the head of ante-post lists for next year's 2000 Guineas after a scintillating display in the Coventry Stakes at Royal Ascot.

Aidan O'Brien's charge was the 13-8 favourite to add to his previous victories at Dundalk and the Curragh and did so in spectacular fashion to leave the usually reserved Ryan Moore hailing him as "at this stage, the best I've sat on."

Caravaggio was always travelling ominously well in the group racing towards the stands rail, but with the horses racing on the other side of the track seemingly having the advantage, Moore decided to make his move early.

The response from his mount was fairly spectacular, with the son of Scat Daddy displaying terrific acceleration in the rain-softened ground to win going away by two-and-a-quarter lengths from Mehmas.

O'Brien, securing a record eighth victory in this prestigious juvenile contest, said: "With the rain coming, I thought we had him in the wrong race and should have run him in the Norfolk.

"He's so quick that I didn't know if he would stay six furlongs in that ground, but it didn't look like he was stopping.

"I'm not sure where next, but obviously the natural progression would be the Heinz (Phoenix Stakes) at the Curragh. That's what we'll be thinking now, but we'll be keeping him at six furlongs for a while anyway.

"Looking at him today, you'd have to think he could get a mile next year. He's a very relaxed horse and very powerful. He's been exciting always."

Moore was full of praise for the two-year-old.

He said: "He was very impressive. I was a bit worried about the ground, but he's won in spite of it.

"When he gets on better ground, he will be a better horse.

Richard Hannon said of runner-up Mehmas: "On better ground, he might have got closer.

"We will sit down and speak to Harry Herbert (owner's racing manager) but he could go for the Richmond (Goodwood) or the July Stakes (Newmarket).

"Maybe the Prix Robert Papin (Maisons-Laffitte) could be for him as Gutaifan went there last year."

The Ger Lyons-trained Psychedelic Funk just held on in a three-way photo for third.

"My horse comes into a different world when the ground goes soft. He was tracking the leader but he just could not pick up on the ground," said Lyons.

"I was very negative coming into the paddock. Colin Keane said he didn't have the speed but he stayed on.

"His class got him through." 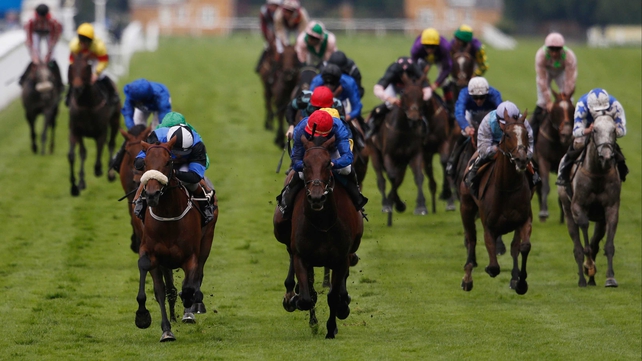 Trained in Ireland by Jarlath Fahey, the Grade Three-winning chaser and Grade One-placed hurdler demonstrated her versatility with a really gutsy effort under Ronan Whelan.

The 6-1 chance simply refused to buckle from the head of affairs, and though Qewy came fast and late, the nine-year-old had done enough, with a neck the winning distance.

Mill Springs was third, another length and three-quarters away, with Moscato fourth.

Whelan said: "I thought if she was with any other yard she would have been a lot shorter (in the betting) than she was.

"Everything was in her favour - the trip, the ground - and she's just so honest.

"She's just so straightforward and she tries her heart out."

Fahey, who only has six horses in training, said: "To come here with a nine-year-old and win at Royal Ascot, it's what dreams are made of.

"He (Qewy) was closing her down rapidly at the line, but Ronan gave her a very good ride.

"This year, for some reason or another, she has just come into her own.

"She's all heart and determination, she really gives it her all.

"We were always going to be handy, we were just a little bit worried about the hustle and bustle at the start, as she has only raced out of stalls once.

"I said if she breaks well to go forward with her and don't get covered in, as we ride her with plenty of space over hurdles. He got a handy lead and she's a good stayer.

"I don't know what the plans will be now, the owners will have a talk.

"She's had a long season, she's been on the go since October and probably needs a break. But she just keeps looking for more." 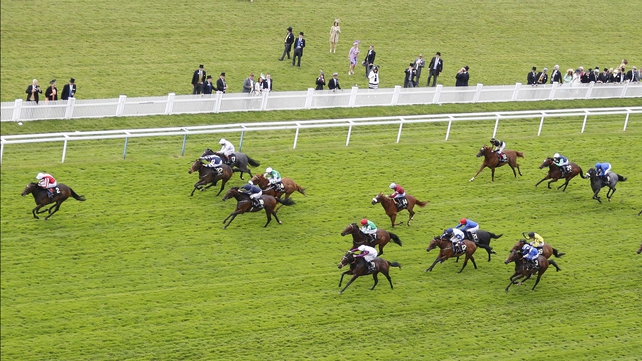 Ardad ran out a dominant winner of the Windsor Castle Stakes at Royal Ascot.

A winner on his debut at Yarmouth just six days ago, John Gosden's 20-1 winner was stepping up to Listed class in the hands of Robert Havlin.

The Kodiac colt moved powerfully towards the far rail before being sent for home and quickly put the race to bed, passing the post comfortably ahead of 100-1 shot Savannah's Dream.

It was a first career winner at the meeting for Havlin, who said: "I've hit the crossbar a few times, thankfully John Gosden kept faith in me!

"When he ran at Yarmouth the other week the boss had already entered him in this race - Yarmouth was like a piece of work and he showed no ill effects after it. John is such a great trainer, he wouldn't have run her without a chance.

"It's great for me, but I'm only a small part of a massive team there. It's like a big family to work in. Well done to them as well."