Galileo Gold, winner of the Qipco 2000 Guineas, heads a list of 13 horses left in the Irish equivalent at the confirmation stage.

Should he be successful in the Tattersalls Irish 2,000 Guineas at the Curragh on Saturday, the Hugo Palmer-trained colt would emulate Gleneagles, who did the double 12 months ago.

"The Curragh has been a happy hunting ground for me and I hope it will be again."

Gleneagles' trainer Aidan O'Brien is responsible for six of the big-race possibles.

His half-dozen entries include Air Force Blue, who was a big disappointment as an odds-on favourite at Newmarket, trailing in 12th of the 13 runners.

O'Brien has left in The Gurkha, impressive winner of the French 2000 Guineas, although he is unlikely to run.

Air Vice Marshal, Bravery, Lieutenant General and Shogun bolster the Ballydoyle team as O'Brien seeks to lift the prize for an 11th time.

Ground conditions are set to be crucial for the participation of Air Force Blue, according to O'Brien.

He said: "We would love to run Air Force Blue if we got a bit of nice ground. We are happy with him since Newmarket and we would love to go there with him and hopefully the ground will stay nice for him.

"We will take a look at things on Wednesday and the amount of rain the Curragh gets will be a factor on what runs.

"The Gurkha obviously only ran last week and we've left him in but more than likely he probably won't run."

Kevin Prendergast's Awtaad and the Michael O'Callaghan-trained Blue De Vega, who were first and second in the Tetrarch Stakes at the Curragh earlier this month, complete the list. 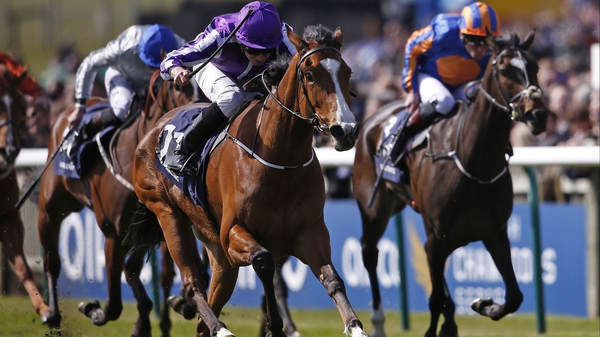