One Track Mind claimed Grade One glory for Warren Greatrex and Gavin Sheehan with victory in a dramatic running of the Ladbrokes Champion Stayers Hurdle at Punchestown.

With staying star Thistlecrack not in attendance, the three-mile contest looked a good opportunity for either the World Hurdle runner-up Alpha Des Obeaux or the Liverpool Stayers' Hurdle second Shaneshill to go one better - but another British raider spoiled the party.

One Track Mind was never too far off the speed and Sheehan set sail for home before the final bend.

Admirable mare Jennies Jewel covered the move, but both looked at the mercy of the strong-travelling Shaneshill before he crashed out at the final flight under Ruby Walsh. 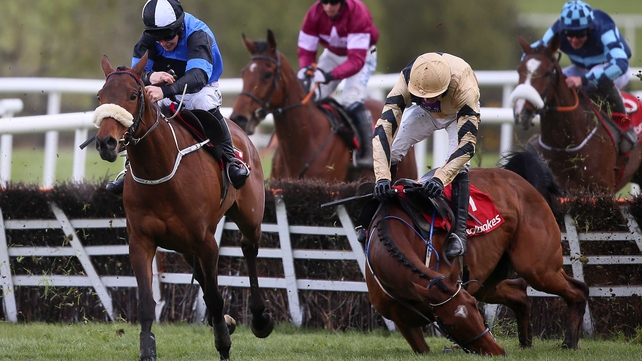 One Track Mind (10-1) galloped all the way to the line to take the prize by two and a quarter lengths.

Sheehan said: "This is brilliant. We've always liked this horse. In the early days we always thought this was going to be the best horse in the yard.

"He came over here a fresh horse. I was never that comfortable as I wanted to get him a bit closer as the more company he has the better he is.

"He was fighting down to the last and battled on. I always said he could be a Gold Cup-type horse."

The winner had been off the track since being narrowly denied by Reve De Sivola in the Rendlesham Hurdle at Haydock in February.

Greatrex said: "I came here for the first time last year and loved it so we brought a little team this year. This is brilliant.

"This has been the plan for most of the season and it depended on how he ran at Haydock. He ran a blinder there and improved from that.

"We said this could be his Gold Cup today and planned all season long for it.

"It was a surreal feeling as I was happy with him the whole way round. He's a real stayer and the aim was to go out and make sure it was a real test.

"He's a brilliant jumper and he'll go chasing next year. He's big and raw and we've brought him along slowly. He'll improve again with another summer.

"Gavin has always loved him and persuaded Andy (Weller, owner) to buy him as he's his sponsor."
Weller added: "My heart can't handle it. He's done brilliantly.

"Gavin followed the directions immaculately. It's been the plan for many months to come here for this.
"Warren has done a fantastic job with him and to win a Grade One here is fantastic."