California Chrome went one better than 12 months ago when winning the world's richest race, the Dubai World Cup, with a tremendous display at Meydan.

The American challenger was beaten by rank outsider Prince Bishop last year, yet despite being posted wide throughout after breaking from his wide draw, he ran out a comfortable winner.

Frankie Dettori was handy throughout on Mshawish but moved off the rail allowing Mubtaahij his chance.

But Victor Espinoza was happy to sit wide on the bend aboard California Chrome and when he kicked for home the race was over as a contest.

Winner of the first two legs of the American Triple Crown in 2014, the popular Art Sherman-trained five-year-old was supposed to run at Royal Ascot in June, but a late setback prevented an appearance in Britain.

His performance was even more meritorious as Espinoza's saddle slipped.

Espinoza said: "I was wide but it was comfortable, he did everything right. Perfect.

"Sometimes it is better to be wide than on the inside and everything went well, I stuck next to the leader.

"I could feel the saddle slipping so I kicked for home earlier than I wanted, it went quite far back. I want to say 'thank you' to everyone, it means a lot."

Sherman said: "He's got such a fan club in Dubai, it's great, he got a standing ovation and it made me feel really good.

"I love this place, it's my third time back. He's a great horse, what can you say? It's the dream of a lifetime for me, it doesn't get better. The Chromies will be going crazy (back home)!"

He went on: "He likes to be on the outside, I just told Victor to get him in a position to win, if you have to lose ground, so be it. I wasn't sure the saddle had slipped until he pulled up.

"I don't think he'll go to England, we'll give him 30 days at the farm to let him unwind and the ultimate goal is the Breeders' Cup (Classic)." 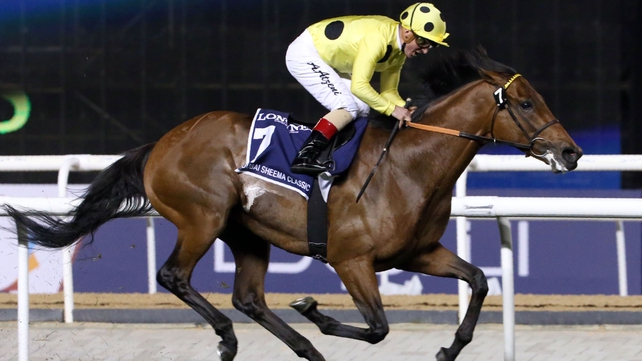 Postponed ran out a ready winner of the Dubai Sheema Classic for Roger Varian.

It was a smooth passage for Andrea Atzeni on the favourite, who travelled sweetly throughout before taking over from Highland Reel at the head of affairs with a furlong to run.

Continuing the theme of the Japanese raiders on the night Duramente, running on just three shoes after spreading a plate, and Last Impact chased him home, with Highland Reel fading into fourth.

Winner of the King George at Ascot last season, Postponed was moved from Luca Cumani after that and looks like being a major player in all the top middle-distance races in this form.

Ryan Moore struck for Japan as Real Steel ran out an impressive winner of the Dubai Turf at Meydan.

Charlie Appleby's Tryster was sent off favourite but William Buick settled him at the back and the slow pace did him no favours.

In contrast, Moore had his mount close to the pace throughout, and despite going wide, it proved the best place to be.

Very Special kicked clear but Moore had the filly in his sights and it was another filly who chased him home in Marco Botti's Euro Charline.

Tryster did run on strongly for third, as did Intilaaq for Roger Varian, but both were set plenty to do, as was David Simcock's The Corsican.

Moore said: "I had a tough trip early, I was caught three deep and I thought maybe I could get a little bit of cover halfway round the turn but the horse in front of me was obstructing me, so I had to send him on a little bit sooner than I would have liked.

"I was running on empty at the end, but he's a beautiful horse with lots of quality and he's just better than them." 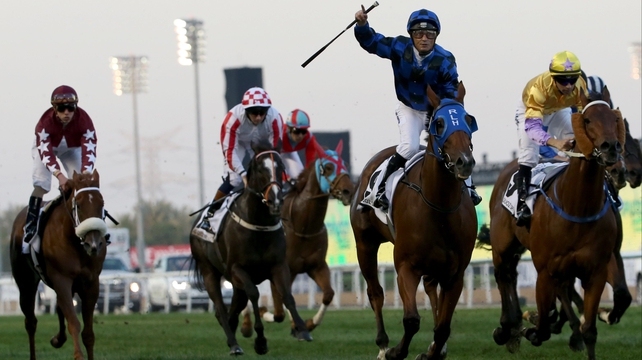 A leading light Down Under - a traditional hotbed of champion sprinters - he was up with the pace throughout along with Peniaphobia.

Ertijaal quickened up and briefly looked set to pull away, but Damian Browne asked Robert Heathcote's speedball for another effort and he pulled out more.

Paul Hanagan had one more crack at the winner, but went down narrowly.

Browne said: "I knew at the 300 (metre pole) he had a good kick. We're proud to be here representing Australia - to come and get the money means a lot to us."

Doug Watson dominated the Godolphin Mile, saddling the first three home with One Man Band making all the running.

Sam Hitchcott was able to set steady fractions in the early part of the race before kicking clear on the turn and never looking in any danger.

One Man Band had been progressive throughout the Carnival meeting and handled the step up to Group Two company with aplomb.

Faulkner improved hugely on his previous form to chase his stablemate home with Cool Cowboy third.

The favourite Marking was only fourth with Jeremy Noseda's Sloane Avenue in fifth.

"He's the most straightforward ride you could get," said Hitchcott. "You just need to get the timing right as he gets everybody at it.

"He kicks off the turn and goes again. He can rock in the stalls a little bit but he was brilliant today."

Watson said:  "It's a great feeling, we've a great team at home and some nice horses. When he turned in and Cool Cowboy wasn't catching I knew he'd won." 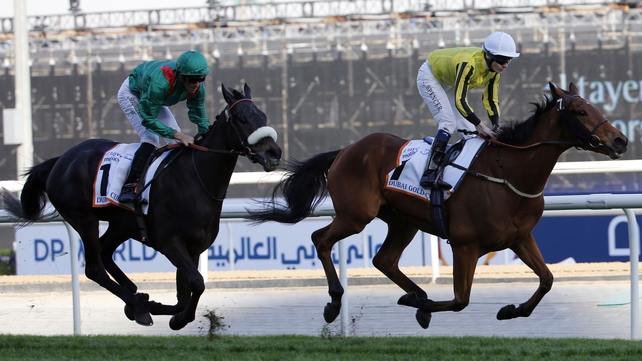 Vazirabad was delivered late and cool by Christophe Soumillon to deny Michael Bell's Big Orange in the Dubai Gold Cup.

Soumillon sat a long way off the pace on Alain de Royer-Dupre's stayer while Jamie Spencer decided to chase to leader and former winner Certerach on Big Orange.

Spencer kicked two furlongs out and took a couple of lengths out of the field, but all the while Vazirabad was closing.

He drew level and looked set to score comfortably but to Big Orange's credit he pulled out a bit more and made the favourite work hard for victory.

Despite putting up 1kg overweight, Vazirabad continued his winning run for France.

Suegioo, having his first start for Richard Fahey, made good late headway to finish fourth, beaten in a photo for third by Haafaguinea.

There was a huge shock in the UAE Derby as Polar River was beaten by the Japanese raider Lani.

Polar River had gone through the Carnival unbeaten, winning the Guineas and Oaks, but it looked hard work for her all the way.

The other Japanese runner, Yu Change, made a bold bid for home and was still in front entering the final furlong,

However, Yutaka Take conjured up a final effort from Lani, who will now be aimed at the Kentucky Derby.

Polar River's electrifying turn of foot was missing on this occasion and, having met trouble in running, all she did when switched was stay on one-paced for second.