Ivanovich Gorbatov gave Aidan O'Brien his first Festival winner since the mighty Istabraq when storming home in the JCB Triumph Hurdle at Cheltenham.

O'Brien has very much concentrated on the Flat since Istabraq captured the third of his Champion Hurdles in 2000, but Ivanovich Gorbatov (9-2 favourite) was well worth the wait.

O'Brien's son Joseph, who has recently retired from riding, has been supervising the young hurdler's preparation ahead of getting his full training licence and Ivanovich Gorbatov, owned by JP McManus, delivered in style to give jockey Barry Geraghty his first success of the week.

Relishing the better ground, Ivanovich Gorbatov made up for his defeat at Leopardstown to defeat two horses from the all-conquering Willie Mullins' stable with Apple's Jade beaten a length and a quarter in second and Footpad six lengths away in third.

"It's not really sunk in yet. It's hard to compare (to winning the Derby) but it's right up there." - Joseph O'Brien

Geraghty said: "I've been banking on this lad all week. I've had a couple of good rides and they've been running well, but it's good to get a score on the board.

"He's only had two runs over hurdles and three on the Flat, I'd say he's a horse who can do it well and it's nice to do it for the boss.

"Joseph has done brilliantly, he told me the first day what he was, he loved him and he loved him for today. He had him so well schooled - I'd say he (Joseph) can only do well (training)."

Joseph O'Brien said: "It's unbelievable, I don't think it's sunk in yet. It's very hard to put into words what I'm thinking right now.

"I was very hopeful but Barry was more confident than anyone, he rode him the last day and was happy to put a line through it, he just said the ground was to blame.

"We were very happy today because the ground was very different. It's not really sunk in yet. It's hard to compare (to winning the Derby) but it's right up there." 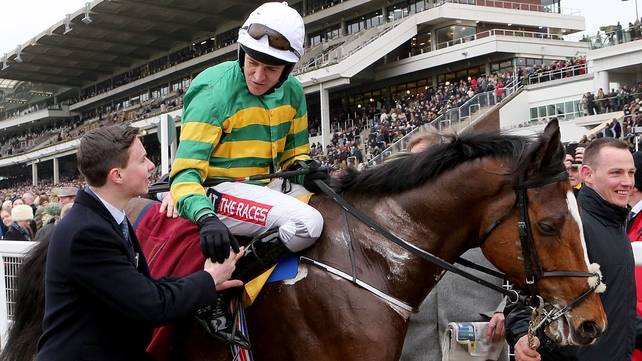 Aidan O'Brien added: "It's unbelievable to be here and it's happened. The last time I saw him was in Ballydoyle and I've just seen him at the races since. It's a great team effort. I'm delighted for Joseph, JP and everyone.

"Joseph rode him to win on the Flat and I always thought this was the closest to him (Istabraq) that we have had."

"That's incredible for him (Joseph) and it's a big deal. He's been brought along nicely and he didn't over-do him for Christmas as he had his eye on running him in this race.

"He needed the last day for experience and Barry gave him a great ride today.

"Joseph has always been around horses, it's like breathing to him and he's worked very hard for this."

McManus said: "It's nice to get Barry off the mark and it's good for the lads down at Piltown.

"He's had to make a bit of a comeback after Leopardstown (beaten at odds-on in the Spring Juvenile Hurdle), but they never lost faith.

"Joseph thought he was a bit heavy that day, that he could have taken more off him, so he had him much fitter today.

"Joseph's record already speaks for itself. I don't think it's any surprise to Joseph that he's won today."

Mullins, who was also responsible for the fourth-placed Let's Dance, said: "Second, third and fourth was not too bad.

"Footpad (who won the race at Leopardstown in which Ivanovich Gorbatov was beaten) missed the first and I don't think he really faced up to the hood.

"Apple's Jade ran a cracker considering the training problems she had.

"Let's Dance ran a good race as well. We'll think about Aintree and Punchestown as well." 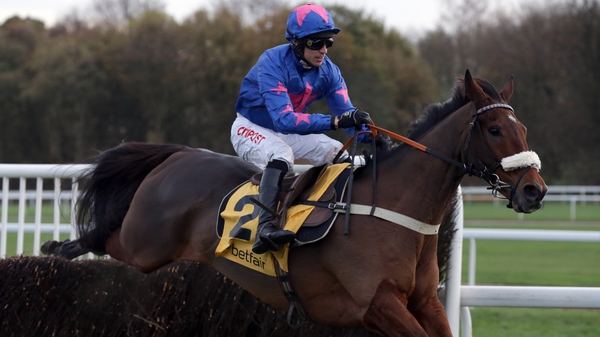