Un Temps Pour Tout put up a determined performance to land the Ultima Handicap Chase at the Cheltenham Festival.

The David Pipe-trained seven-year-old got the better of Holywell, the winner of this race in 2014, after a good battle from three out.

There was little between them turning for home with two to jump, but Un Temps Pour Tout (11-1) pulled away up the hill under Tom Scudamore to win by seven lengths.

The Young Master was nine lengths back in third, with Morning Assembly fourth.

Scudamore said: "We had a dilemma at the beginning of the week which race to go for - we chose the right one.

"This hasn't been a season to remember by our standards, but the last few weeks we've managed to get it back on track.

"He put the race to bed pretty quickly." 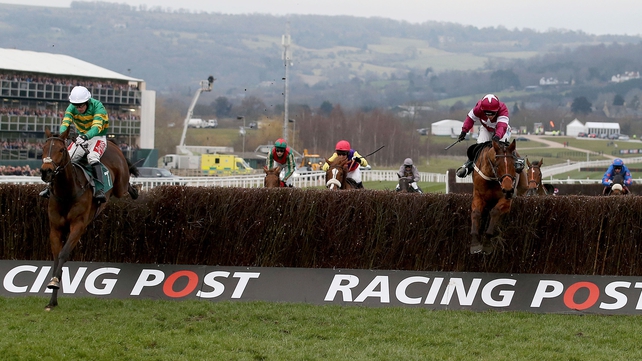 Minella Rocco (pictured above, left) showed stamina in abundance to run out a gutsy 8-1 winner of the 146th Year Of The National Hunt Chase Challenge Cup over four miles and 25 fences.

Taking it up at the final fence, the JP McManus-owned Minella Rocco kept on resolutely and, despite running around up the hill, went on to score by a length and a quarter from Native River.

Measureofmydreams was six lengths away in third place.

O'Neill said: "I was a bit worried about the track for him. He's run twice here before and not gone well. He put in a good run at Ascot where he jumped well and did everything right.

"Derek O'Connor gave him a fantastic ride. He got him into a nice rhythm and bided his time. He is a massive big horse and he has a massive stride and you have to give him a little bit of room, but Derek did everything he needed to do.

"He stays well and is just a decent horse. I'd say the ground was also key. Although he is a very big horse, decent ground is a big plus. He has been beaten a few times on soft.

"I was disappointed that he didn't win at Haydock over two and half miles as, while it would have been plenty sharp enough, I thought he was good enough to do that.

"It's great for the team at home as they do a lot of work and it's great to see them rewarded on the first day as it takes the pressure off."

Ballyalton returned to his best form to claim the Close Brothers Novices' Handicap Chase at Cheltenham at odds of 12-1.

The nine-year-old had failed to win in four previous starts over fences after finishing second to Faugheen in the Neptune Investment Management Novices' Hurdle in 2014.

He showed that he had fully got over his heavy fall at Ascot last month to strike for trainer Ian Williams.

Ballyalton was challenged hard by Bouvreuil (14-1) at the last, but he battled on courageously for Brian Hughes to get the verdict by half a length.

The always-prominent Double Shuffle (8-1) was four and a half lengths away third with Bridgets Pet (33-1) fourth.