Annie Power predictably proved much too good for her two opponents on her long-awaited return to action at Punchestown.

The Willie Mullins-trained eight-year-old, who suffered a well-documented final-flight fall when having last year's OLBG Mares' Hurdle at Cheltenham at her mercy, was making her first appearance since bouncing back from that mishap at the Punchestown Festival last May.

She was sent off the 1-20 favourite to dispatch of a pair of vastly inferior rivals on ratings, and Ruby Walsh kept things simple, sending her straight to the lead and not seeing another rival for the duration of the two-and-a-half-mile journey.

Annie Power finished a long way clear of Legacy Gold, who beat Melbourne Lady to the runner-up spot on her first start for nearly two years.

Walsh said: "She was good. She was quite worked up and revved up before the race, but she went about her business well.

"She jumped super and only did what she had to do. Willie's intention was to bring her for a bit of work here on Friday in a schooling race, but he decided to run her here."

Annie Power was sporting a hood for the first time, and Walsh added: "I think you could have put the hood on me for all the effect it had on her!

"She was quite worked up at the start, but it was her first run in a long time and she's entitled to be fresh."

Following the news that stablemate Faugheen will miss his defence of the Champion Hurdle through, there is the possibility Annie Power may now head for the hurdling feature at Prestbury Park.

Speaking after today's race, Willie Mullins said: ""We can get her supplemented. She could be in it (Champion Hurdle). I haven't spoken to the owner yet about anything like that, but I think it must be on the cards, I think.

"She was very keen. The hood probably helped her.

"I suppose it was just a schooling exercise, but that was plenty for her at this stage. We still have a few more harder bits of work to do between now and then." 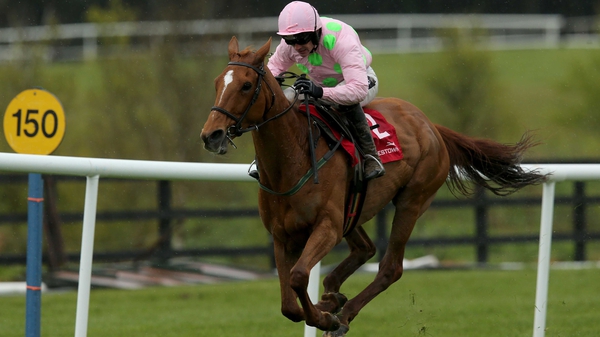