After a couple of early mishaps in his novice season over fences, the grey went back hurdling and it clearly did his confidence the power of good as he finished second in the Ladbrokes World Hurdle at the Cheltenham Festival in March.

Saphir Du Rheu easily won an Aintree Grade One on his return to chasing a month later, and also enjoyed an impressive return to action at Carlisle at the beginning of the month.

The six-year-old was challenging Coneygree for Hennessy favouritism before trainer Mark Bradstock was forced to withdraw the Gold Cup winner, with Nicholls' inmate now the outright market leader.

Nicholls said: "He schooled over a dozen fences with Sam Twiston-Davies on Thursday morning and he worked Wednesday with his half-brother Ibis Du Rheu.

"He looks fantastic and we are very happy with him.

"He has got a lot to do off the weight, but he is a big, strong horse and well capable of winning off top weight.

"If he is going to be smart over fences he will have to run well off that weight.

"On his World Hurdle form, he deserves to carry that weight and there are not too many in that field that will have been placed in a World Hurdle.

"He is a second-season novice and he will have to jump at his very best."

Owner Andy Stewart feels the spell back over timber revitalised his charge.

"What made Saphir Du Rheu was running in the World Hurdle," said Stewart.

"He couldn't beat Cole Harden (World Hurdle winner) and is no Big Buck's, but he went there after fluffing his lines over fences a couple of times.

"Paul says he's the only one (Gold Cup contender) he's got in his yard, as Silviniaco Conti won't go for that.

"Paul always said he was a chaser, not a hurdler. We're back to chasing and win, lose or draw, that's what we will continue to do.”

Despite the absence of the current Gold Cup holder, there is still one winner of the blue riband - and Hennessy - in the field, with the well-backed Bobs Worth running for Nicky Henderson.

He will be ridden by Nico de Boinville in Coneygree's absence and warmed up for the Hennessy with an uplifting return to winning form over hurdles at Aintree earlier this month.

Henderson said: "We've come in on an odd preparation, if you like, in that we've given him a run over hurdles, but it was always in my mind that would amuse him and it was good.

"I don't know what sort of a race it turned out to be, but it was perfect for what we wanted to do with him.

"He's got a race under his belt that he has enjoyed.

"He's won this before in 2012, but he's in a different place nowadays to where he was then, so it's probably going to be tougher.

"He's very special, he's very loved and he has a fantastic team of owners.

"He's fallen down the pecking order a bit, but our job is to get these horses back and what we were doing at Aintree the other day was part of the plan.

"He's had some very hard battles and they show, at the end of the day.

"If he could come back and win a race like this it would be very special." 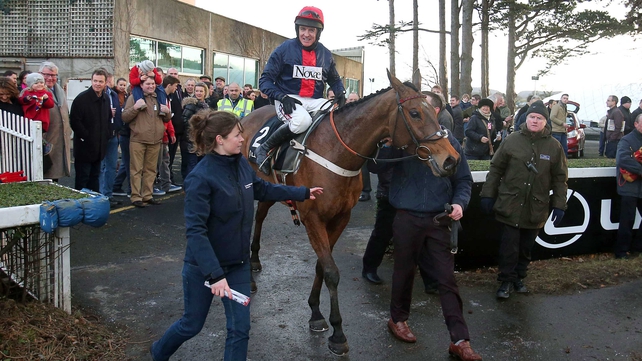 Fingal Bay, who was pulled up in the race when well fancied 12 months ago, is one of two runners for Philip Hobbs.

Jockey Richard Johnson told At The Races said: "He had a really good run, I thought, at Kempton behind Smad Place on level weights that day and in the Hennessy we're getting 9lb.

"You'd like to think wherever Smad Place finishes, we won't be far away.

"I think he's got a live each-way chance, but it's probably made it even more open now Coneygree has come out.

"We could never get to the bottom of why he wasn't right last year.

"He didn't run from February until Kempton a few weeks ago and he wanted to get on with it.

"He jumped nicely and he's bound to have improved for the run as he's a big, stuffy horse.

"He's 9lb lower than last year, but he had two very poor performances last year so it was fair enough for the handicapper to drop him."

Hobbs also saddles the JP McManus-owned If In Doubt, who will be partnered by Barry Geraghty.

The Minehead handler said: "He's a backward horse and he's in particularly good form, but the main problem has been his jumping."

Neil Mulholland is another trainer with two live chances through The Druids Nephew and The Young Master, runner-up to Saphir Du Rheu at Carlisle.

"They both deserve to be there, they are obviously in good form so it's fingers crossed," he said.

"The Young Master has been pleasing us. He had a nice reappearance run over two and a half miles and we've been very happy.

"He's a progressive horse and I hope he continues that way. He's only six and this is just his second season as a chaser.

"I definitely think Saphir Du Rheu is a classier horse, but we are meeting him on better terms than Carlisle and we are definitely more of a stayer.

"We're not going there saying we are going to win, but they should both be competitive.

"Soft ground would be a concern for The Druids Nephew. There are other options for him so it doesn't have to be about Saturday, but he has been trained for it."

First Lieutenant finished third to Bobs Worth three years ago and though he has struggled to show his best of late, trainer Mouse Morris is not without hope.

Morris said: "He is grand after his run in Clonmel and there is not a bother on him.

"We left the headgear off there because he was just starting back and I thought it was a very good run.

"He is showing me a bit of sparkle and I feel there is still a good bit of ability there if I can get him back."

Colin Tizzard's Theatre Guide, representing a yard in red-hot form, is at the bottom of the weights.

"He has done a lot of work since he finished third at Wetherby," said Tizzard.

"Of all the horses we have run this season, he definitely needed his first run the most.

"He has been working with Cue Card, although he has not been keeping up with him.

"He has been placed in the Hennessy before (two years ago) off a higher mark and I think he is a better horse now."